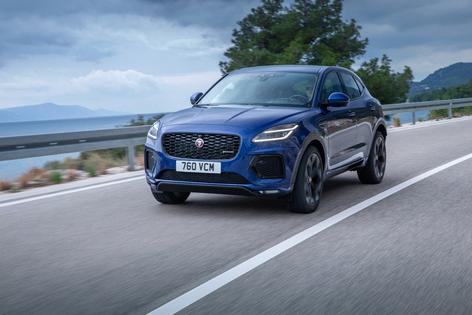 A Jaguar crossover SUV is a strange cat. What's next? KISS releasing a country record?

But then, no one wants to see Gene Simmons in a cowboy hat singing about his pick-up truck. On the other hand, crossovers are the in-thing. They are becoming almost the only thing.

Even for a company such as Jaguar that was known for its cars -- which it hardly makes anymore. Of the three models it still offers for 2022, two of them aren't cars.

Despite the name, the E-Pace isn't electric -- at least, not as it comes.

This compact-sized, two-row crossover SUV comes standard with what will probably be Jaguar's last stand-alone internal combustion engine, the company having publicly said it will build only electric or at least partially electric (i.e., hybrid) vehicles by 2025.

The $40,995 to start P250 version is powered by a turbocharged 2.0-liter, four-cylinder engine paired with a nine-speed automatic transmission and standard all-wheel-drive.

A top-of-the-line P300, which stickers for $49,495, is partially electrified. It also has the 2.0-liter turbo'd four under its hood, but it's paired with a mild hybrid system that keeps the internal combustion engine off as often as possible.

Interestingly, this does not save gas. The hybrid P300 rates virtually the same gas mileage as the non-hybrid P250 -- 20 city/26 highway versus 21 city/26 highway.

Most top-of-the-line luxury sedans are two things -- big and pricey -- except for one big luxury sedan that's not but is often overlooked: Volvo's S90.

The S90 is Volvo's largest, most luxurious sedan. It ...Read More

You often hear that new cars, especially new crossovers, are so similar they (the car companies) might as well get together and just sell one.

The complaint has some merit. It is hard to tell one crossover from another ...Read More

The smallest Buick ever is now a little bit bigger.

Well, except for what's under its hood, where you'll find the smallest engine ever put in a Buick. Just three-cylinder and 1.2 liters. There are motorcycles ...Read More

If you want to drive the new Nissan Z-car, you'll have to wait a bit longer since it's not yet available.

But you can get a very similar car right now -- from the same company that makes both.

Retractable hardtops have their virtues, the chief one being that when the top isn't retracted, you have a solid roof over your head -- and over what's in your car.

It is harder to slice open a hardtop than a top made of ...Read More

Today, it sells just one car other than the Camaro and Corvette, neither of which is a family ...Read More