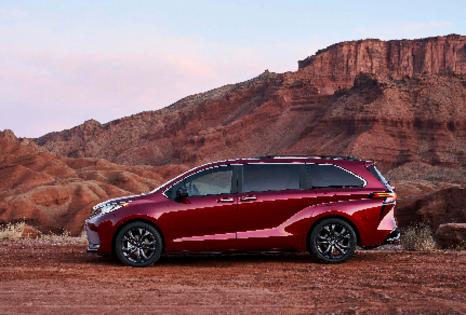 What will it cost you to "save gas?"

The Sienna is a full-size minivan that seats seven to eight, depending on the configuration. It is also the only van in the class that no longer comes standard with -- or even offers -- a V6.

Instead, it comes standard with a 2.5-liter, four-cylinder engine paired with an electric motor and battery pack. This costs 51 horsepower versus last year's V6, but the new Sienna averages 36 miles per gallon, making it the easiest-on-gas van in the class.

Base price is $34,460 for the LE trim configured for eight passengers with a second row bench. This amounts to about a $3k price bump from last year's Sienna.

The $39,750 XLE is configured for seven with second row captain's chairs. All trims can be equipped with all-wheel-drive, which gives the Toyota an advantage over its long-time primary rival -- the Honda Odyssey -- which comes only with front-wheel-drive.

In addition to its new hybrid drivetrain, the Sienna gets revised exterior and interior styling with the most obvious changes being the flared rear fender haunches and a new-design center console integrated with (rather than separated from) the dashboard, with the gear selector relocated there from its former position built into the dashboard.

What does the Mini Cooper have that the VW Beetle lacked?

The question arises because the Mini is still here while the Beetle isn't. The resurrected icon was initially very popular when VW brought it back in the late '90s...Read More

Would you be interested in a lighter, quicker -- and less expensive iteration of BMW's Z4 roadster? With a hard top rather than a soft-top?

Then step right up! Toyota has what you're looking for -- in a package that's ...Read More