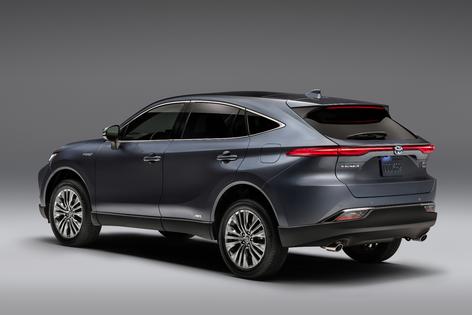 It's been absent from Toyota's roster of models since the 2015 model year, probably because Americans, for whatever reason, just aren't much into station wagons -- which is what the first generation Venza was.

They are into crossovers, particularly those made by Lexus, such as the very popular RX350. The problem is Toyota doesn't sell that model under its own label.

Enter the new Venza, which is very similar not only to the Lexus RX350 but even more like the RX450h, the hybrid version of that model.

It's just a bit (but not that much) smaller. And a lot smaller-priced.

The new Venza -- unlike the old Venza -- isn't a higher-riding, wagonized Camry. It looks a lot like - and is laid out a lot like -- the Lexus RX, which is a mid-sized luxury crossover SUV. The Venza is slightly smaller than the mid-sized RX, but it has comparable room inside for passengers -- and much more room inside for cargo.

This is nearly $8,000 more than the $40,000 Toyota charges for a top-of-the-line Venza Limited, which comes with a massive 12.3-inch touchscreen that's the same size and type as the one in the Lexus RX450h, a similar JBL premium audio system with nine speakers, heated/ventilated seats and heated steering wheel, simulated leather trim, a 360 degree bird's eye surround-view camera system and a huge panorama glass roof that auto-dims at the touch of a button.

Soon -- in just a few years from now -- VW says it will only be selling electric cars. Right now, it is one of the few companies selling cars at all.

The rest are selling almost nothing but crossovers and SUVs.