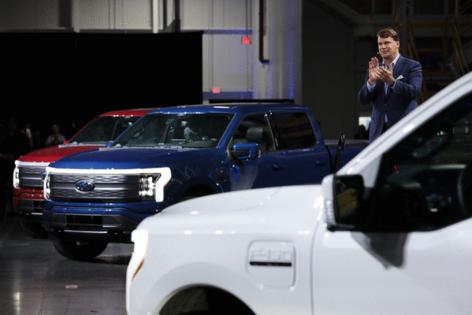 DETROIT — Roughly two-thirds of Ford Motor Co.'s dealer network in the U.S. has opted to participate in a new — and, to some, controversial — certification program governing how dealers handle electric vehicle sales.

Ford CEO Jim Farley, speaking at the Automotive News World Congress downtown Monday, said that 1,920 Ford dealers have enrolled in the Model e program for 2024-2026. Of those that enrolled, the vast majority — 1,659 dealers — opted into the highest level, "certified elite," which gives them full sales and service capabilities and requires a higher investment level. Another 261 dealers opted to become "certified" with full service capability, a cap on how many EVs they can sell, and a lower investment requirement.

Ford has about 3,000 dealers in its franchised dealer network in the U.S. The company will give those that didn't enroll this time around another opportunity to do so in 2025, for another wave that starts in 2027.

Farley said executives didn't have a specific enrollment number they were aiming for, but wanted to ensure Model e dealers were adequately spread out to serve customers who are new to the brand.

Ford executives unveiled the standards in September at the company's annual dealer meeting in Las Vegas.

Some dealers and trade groups that represent them have pushed back on the standards. They've expressed concerns about the amount of spending required for EV charging infrastructure, questioned how they'll recoup their investments and argued that some of the program's provisions run afoul of state franchise laws. Generally, those laws require legacy automakers to sell vehicles via dealers and give dealers authority to set pricing.

State dealer associations in a number of states have pushed back on Ford's EV standards. And Ford now is facing legal challenges over the program, Automotive News first reported. Those challenges include a lawsuit filed on behalf of four dealers in New York, an attorney for the plaintiffs in that case confirmed to The Detroit News.

The program also has attracted the attention of a federal lawmaker. U.S. Sen. Richard Blumenthal, a Connecticut Democrat, wrote to Farley last week, urging him to extend the program's enrollment deadline and raising concerns about what he described as its "costly" requirements, according to a news release.