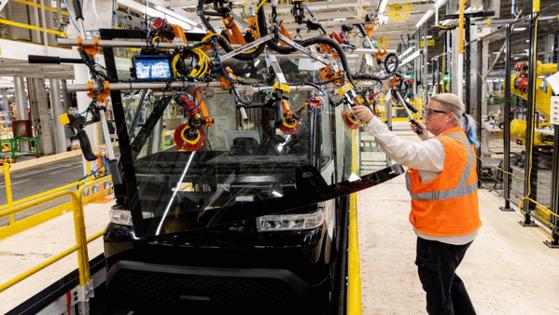 The company also said Monday it has launched production of the BrightDrop Zevo 600 electric delivery vans at GM's CAMI Assembly plant in Ontario, making it Canada's first EV factory. The delivery vans were previously being manufactured at small scale at a Michigan supplier plant until the CAMI facility was ready for production. Production of the Zevo 400, a smaller model than the Zevo 600, will start in late 2023. BrightDrop expects to make 30,000 next year and scale to 50,000 by 2025.

"Bringing BrightDrop to Canada and starting production at CAMI is a major step to providing EVs at scale, while delivering real results to the world's biggest brands," BrightDrop president and CEO Travis Katz said in a statement.

The announcements come after GM last month said its BrightDrop business is on track to reach $1 billion in revenue in 2023. The startup, which had previously only given revenue expectations of $5 billion by mid-decade and possibly $10 billion by 2030, also confirmed it will reach 20% profit margins by the end of the decade.

GM formed BrightDrop in 2021. The business is focused on providing emissions-free products for delivery companies. Its products include the Zevo electric delivery vans, Trace eCarts for easier package delivery and the BrightDrop Core software platform.

The automaker invested more than $800 million to convert CAMI for high-volume EV production.

DHL will add its first Zevo vans to its fleet early next year. The company is also piloting BrightDrop's Trace eCarts and software platform in Toronto.

Overall, BrightDrop has 25,000 production reservations and expressions of interest for its electric delivery vans and so far the company has delivered FedEx 150 Zevo vans out of the 2,500 ordered.