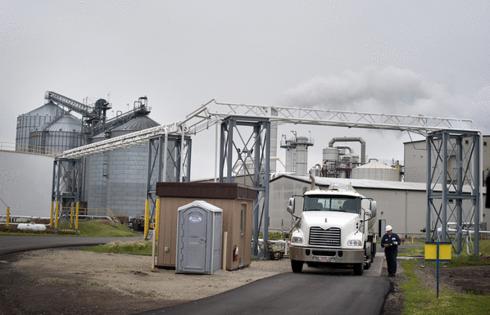 Minnesota farmers whose corn and soybeans are blended into biofuels received a long-awaited blueprint of a rule from the Environmental Protection Agency on Thursday that could pave the way to more biomass-based, domestic fuel stocks being mixed into the nation's vehicle engines.

In releasing a proposed update to the Renewable Fuel Standard (RFS), the nation's top environmental agency set the table through 2025 for higher blending of renewable fuels with petroleum products to create gasoline.

The EPA said Thursday's proposal could decrease U.S. oil imports by up to 180,000 barrels a year — though that's a fraction of the 6 million barrels imported annually. The proposed rule also contemplates awarding credits to manufacturers of electric vehicles in an effort to bolster the White House's pledge to decarbonize the nation's transportation system.

The agency will hold a public hearing and take comments on the rule through January.

"Once finalized, this rule will send a strong signal about the important role that ethanol can continue to play in reducing emissions, enhancing domestic energy security, and creating rural jobs," said Brian Werner, the Minnesota Bio-Fuels Association executive, in a statement.

Minnesota Corn Growers Association President Richard Syverson, a farmer from Clontarf, said his group was pleased with the blending target.

"Maintaining annual volumes at or above 15 billion gallons will provide consistency for consumers," Syverson said, "ensuring that cleaner-burning, renewable biofuel blends like Unleaded 88 are readily available."

According to the Minnesota Corn Growers Association, 9.5 million gallons of E-15 fuel were purchased at pumps in August. Previously, the state had never eclipsed 9 million gallons. But this summer, in an effort to contend with rising fuel costs, the Biden administration temporarily lifted a ban on use of E-15 in the summer months.

Not all industry leaders cheered Thursday's proposal. The Iowa Biodiesel Board said in a tweet that the rule's targeted volumes "underestimated" the capacity for growth in biodiesel.

But Minnesota U.S. Rep. Angie Craig, cheered the rule as a win for farmers in her district.

"We've seen that tapping the power of America's biofuel producers and our family farmers is a key component in helping us advance on many of our climate and energy priorities and stabilize our fuel market," Craig said in a release.

Under the Trump administration, several small oil refineries, citing economic harm, were awarded exemptions by the EPA from compliance from the RFS. The RFS was established by a 2005 law requiring the nation's fuel producers mix greater amounts of renewable fuels with petroleum each year.

The law sunsets in 2022, and EPA says this is the first time the agency will provide an escalating target without explicit authorization from a statute.