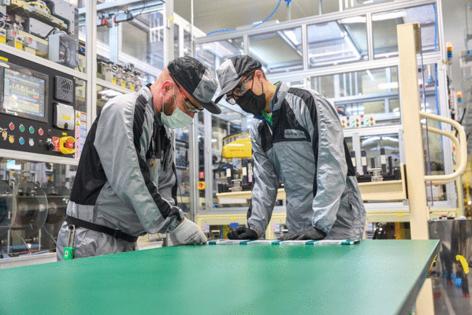 An election to unionize the first General Motors Co. and LG Energy Solution battery cell manufacturing plant is scheduled for Dec. 7 and Dec. 8, according to a National Labor Relations Board filing.

The United Auto Workers in October filed to have a union election on behalf of about 900 workers at the joint-venture Ultium Cells LLC plant in Warren, Ohio. The filing, made with the Cleveland office of the National Labor Relations Board, came after a back-and-forth on whether Ultium would recognize the union through a card check process instead of an election.

UAW President Ray Curry at the time said while most Ultium workers have signed cards to authorize UAW representation. Ultium, GM's joint-venture battery company with LG, declined to recognize the UAW as the employees' union.

Ultium Cells spokesperson Brooke Waid previously said the company "believes the right to a personal and private vote is important."

Since Ultium is a joint-venture company owned by GM and LG, workers are not included in the national UAW contract with GM, which expires next year. Organizing the Ultium battery plants and other Detroit Three battery operations is crucial for the UAW's future in the electric vehicle transition.

The Ultium plant in Warren is the first of four plants to start making battery cells for GM EVs. Two other plants, in Spring Hill, Tennessee, and in Delta Township near Lansing, are under construction. GM and LG are looking at New Carlisle, Indiana, as the location for their fourth battery plant in the U.S.

Q: Recently, I was told by two repair shops that I needed to replace the original catalytic converter on my 2005 Honda Accord coupe. The Honda dealer where I purchased the car recommended a certain shop because a ...Read More

The arrival of the North American all-electric Fiat 500e in 2024 will mark the new direction of Stellantis NV's Italian small-car brand on the continent: pursuing wealthy, urban buyers looking for a fun ride.