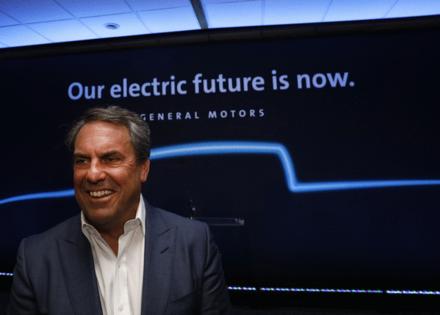 GM's EV performance expectations highlighted Thursday to investors are before the company would see benefits from new government tax credits, executives noted. GM is now projecting revenue to grow at a 12% compound annual rate through 2025, reaching more than $225 billion as EV volumes and software revenue grow. EV revenue is estimated to be $50 billion in 2025.

At last year's Investor Day, GM said it expected to make $90 billion in EV revenue by 2030. It also said EVs and tech-driven businesses will swell profit margins to between 12% and 14% and double revenues to about $280 billion by 2030.

"GM's ability to grow EV sales is the payoff for many years of investment in R&D, design, engineering, manufacturing, our supply chain and a new EV customer experience that is designed to be the best in the industry," GM Chair and CEO Mary Barra said in a statement. "Our multi-brand, multi-segment, multi price point EV strategy gives us incredible leverage to grow revenue and market share, and we believe our Ultium Platform and vertical integration will allow us to continuously improve battery performance and costs."

The expansion of EV production will be based on GM's anticipated battery cell manufacturing plants starting production. GM and partner LG Energy Solution through their joint venture Ultium Cells LLC are building four battery cell plants in the U.S. Currently only one in northeast Ohio has started producing cells. The automaker expects to reach U.S. battery cell capacity of more than 160 gigawatt hours and 1.2 million cells per day by 2025 with three of the four U.S. battery plants in operation by the end of 2024.

Ultium is eyeing a New Carlisle, Indiana, site for the location of its fourth U.S. battery plant but the decision to invest there hasn't been finalized.

Outside of securing battery cell production, GM has also been securing commitments for "all" the battery raw material needed to hit its 2025 capacity target.

To reach its profitability projections on EVs, GM is focused on reducing the cell costs for its next generation of Ultium batteries to under $70 per kilowatt-hour by mid-to late-decade, which is a reduction from the expected 2025 cost of $87 per kilowatt-hour, Chief Financial Officer Paul Jacobson said.

Beginning next year through 2025, GM's total capital spending is expected to be $11 billion-$13 billion per year. This is up from the $9-10 billion GM is spending this year.

Next year will be a very important EV launch time for GM with the Chevrolet Silverado EV, the Blazer EV, the Equinox EV.

GM's BrightDrop business, which is on track to hit $1 billion in revenue in 2023, will launch full production of the Zevo 600 delivery vans next year at the CAMI plant in Ontario. BrightDrop intends to scale to a projected 50,000 units annually by 2025. GM's announced EVs will be made across give North American assembly plants including two in Michigan: Factory Zero Detroit-Hamtramck Assembly Center and Orion Assembly in Lake Orion.

To meet its EV goals, GM is working to prepare its U.S. dealer network for changes. On Thursday, executives announced "a new digital retail platform" with those dealers "to enhance the shopping and purchase experience for EV customers and reduce costs to GM by an estimated $2,000 per vehicle," the automaker said.

Jacobson said the company is building a "regional distribution strategy" that will lower costs for GM and its dealers. The Detroit News previously reported in 2021 that GM was exploring the use of regional distribution centers owned or leased by GM for the Chevrolet Bolt electric car and Bolt EUV.

"What customers will be able to do is choose how they want to interact and purchase their vehicle," he said. "They can do it entirely online and take delivery at a dealer, they can go see a dealer, etc. But what we want to do is be in a position to be able to efficiently satisfy customer orders very, very quickly."

Subaru has gone to great lengths to entice outdoor enthusiasts with its well-touted symmetrical all-wheel-drive, and model names like Forester, Outback and Crosstrek.

But nothing says rugged better than the new Wilderness...Read More

A candidate in the race to become president of the United Auto Workers is suing the union and its court-appointed monitor in an effort to extend the deadline by when members can request ballots and return them in the first...Read More

The maker of Jeep SUVs and Ram pickup trucks said Thursday it will acquire AiMotive, a startup for artificial intelligence and autonomous driving software.

It's a move, Stellantis NV said in a news release, to accelerate ...Read More