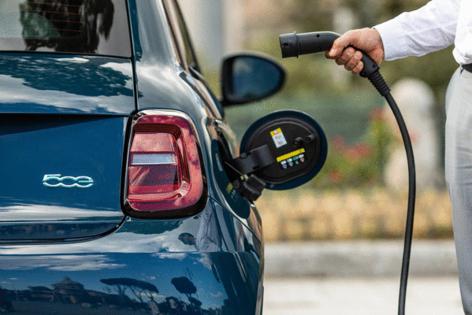 The Italian small car brand of Stellantis NV is bringing a new generation of the 500e to the continent starting in the first quarter of 2024, it said Thursday at the Los Angeles Auto Show, betting on the next chapter for Fiat here as consumers become more willing to consider EVs.

The announcement indicates a continued commitment by Fiat in the United States since its reintroduction in 2011, with Stellantis CEO Carlos Tavares giving each of the company's 14 brands 10 years to show growth and prove their value. But U.S. sales have dried up, falling 62% year-over-year in the first nine months of 2022 with just 797 Fiats sold. The competitive U.S. market, Americans' love for larger trucks and SUVs, and being starved of fresh product has made it difficult for the Italian brand to make inroads. Today's lineup is a single vehicle: the 500X subcompact SUV.

The 500e will be Fiat's first all-electric vehicle in the marketplace since it ended production in 2019 of the previous generation 500e, which former Fiat Chrysler Automobiles NV CEO Sergio Marchionne famously asked customers not to buy, "because every time I sell one it costs me $14,000."

Now, Fiat says it'll be an all-electric brand by 2030. It didn't disclose the pricing for the North American model, but the Italy-made all-electric "New 500" launched in 2020 for Europe that the 500e will be based off was the top-selling EV in Germany and Italy in the first half of 2022.

"Since 1899, Fiat has played a role in developing mobility, not only delivering vehicles to the masses but also pursuing a social mission and riding the wave of 'what's next,'" Fiat CEO Olivier François said in a statement. "Today, more than ever, we are facing a global revolution, which means that customers are looking for more than just a car and we intend to embrace their changing needs. The new 500e is more than a car, it is a social project to feed America's appetite for change toward sustainable mobility. We want to introduce America to EVs with our icon, the Fiat 500, because this is the right thing to do."

The market is different from 2013 when the original 500e launched, said Stephanie Brinley, principal automotive analyst for S&P Global Inc.'s mobility team. Regulators are pushing for EVs, funding installation of the charging infrastructure needed and offering subsidies for their purchases — though to qualify for any assistance, EVs must be assembled in the United States. That's helped encourage consumers to be more willing to consider an EV, though they still represented just 5.5% of U.S. sales in the first nine months of the year.

"There is more opportunity for a 500 EV in today's market than the first one," Brinley said. "We're transcending from the innovator stage to really these still are early adopters to mass-market electric vehicle sales. We're still in a push environment for that. It might not be the vehicle they buy in 2024, but in 2026. Everything happening is the groundwork to that."

The economics around EVs also are changing. The merger last year between FCA and French automaker Groupe PSA is providing greater scale for a global presence, lower costs, more capital and broader product programs, Brinley noted, and the growth of EV supply chains is expected to help reduce the expenses of producing them.

"PSA's electric vehicle progress was a little further along than FCA's was," she said. "There's the ability of the U.S. arm to take advantage of that scale."

But since Fiat still remains a small player, it'll continue having to reintroduce itself to buyers, Brinley added: "In 2024, '25, we're seeing so many more electric vehicles. Being electric won't be enough to standout. There's some work ahead in raising the relevancy of the brand."

Specifications of the North America offering, which will be revealed at the 2023 Los Angeles Auto Show, aren't yet available. The European version comes with a 24 or 42 kilowatt-hour battery pack with the larger one offering up to 199 miles (320 kilometers) of range based on U.K. standards. The output of its electric motors are 94 horsepower and 117 horsepower.

This year, Fiat at the L.A. show shared three 500e one-off designs from the Armani and Bvlgari luxury fashion houses and Kartell furniture company, according to a news release, to reflect "Italian craftsmanship, creativity and sophistication" and embody Fiat's sustainability vision.