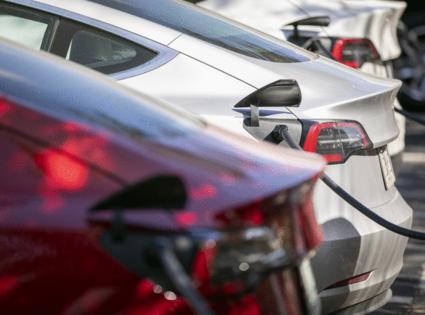 Keller Strother got his first Tesla, a Roadster, in 2011. He still has it, though his garage now includes two more Teslas and a vintage Porsche 911 that recently had its gas-burning guts swapped out for a battery and electric motors.

In a warming world, where roughly one quarter of Americans are keen to buy an electric vehicle, Strother has four of them.

“The technology is so viable and it’s such a better solution,” he says. “And I’ve always been a little obsessed with having the right tool for a job.”

EV adoption is finally ramping up in the U.S. But what the fever line doesn’t show is that it’s lumpy. A large share of battery-powered cars are being bought by households that already own an EV, or two or three for that matter. The EV early adopter has given way to the superuser or, some might say, the hoarder. And despite their good intentions, these double-dippers may unwittingly be shrinking the climate benefits their cars can offer.

“A, the wrong people are buying these cars,” says Ashley Nunes, a Harvard economist studying this dynamic. “And B, the way those people are using these cars makes it very difficult for them to deliver an emissions advantage.”

In a recent Bloomberg survey of EV drivers, 14% of respondents said they owned more than one battery-powered vehicle, and 6% of those surveyed had three or more. That doubling-down dynamic is clear in sales data, too. Some 26% of EV buyers in the second quarter either traded their used electric car for a new one or simply added another to their garage, according to Edmunds. Another 9% of recent EV buyers were already driving a hybrid. Scientists, politicians and auto executives have championed electric cars to replace gas-burning vehicles, but much of the time that’s not what’s happening — at least not yet.

The repetitive buying isn’t all bad. It’s a validation of the technology, a clear pattern that, when familiar with both options and given the choice, many prefer to drive electric. It also suggests that the typical reservations among the EV-curious — namely range anxiety and charging confusion — fade quickly with use.

“It speaks to a level of excitement,” says Berkeley economist Lucas Davis. “These people love their cars.”

But it presents a problematic paradox: An EV is only a decarbonizer to the extent that it offsets both gas-powered driving and the emissions needed to make it, a process that leaves a far larger carbon footprint than that for a gas-powered car. The only way for the machine to cover its carbon, so to speak, is in miles. But, critically, in two-, three- or four-EV households, each successive car tends to be driven less. If a vehicle is going to be sitting idle in a garage, a gas-burning version is arguably a cleaner option than an EV, because of all the carbon that goes into making the latter.

Take Strother, 62, and his three Teslas. Together with his wife, he only puts about 15,000 miles a year on his fleet; after more than a decade, his seminal Roadster only has 11,000 miles on the odometer. “I haven’t commuted since 2000,” Strother says. “I occasionally drive more than 30 miles in a stint, but not often.” The couple at least charges their vehicles from home solar panels.

Davis, at Berkeley, found that in multi-vehicle households, an EV tends to be the secondary or tertiary car. Some two thirds of households with an EV also had a gas-powered car that was driven more often. What’s more, that vehicle is more often than not a relatively inefficient one — namely a large truck or SUV.

“That’s bad,” Davis says. “If EVs are going to be an environmental solution, it hinges on them being widely adopted beyond what’s a niche product for rich people.”

At the moment, of course, most Americans can’t afford even one new EV. Production is likely to lag demand for years as carmakers rush to spool up new battery plants and assembly lines. In part because supply is so scarce, the average sticker price for an EV in October was almost $59,000, nearly one quarter more than the industry at-large, according to Edmunds.

Many Americans willing and able to pay those prices don’t need to sell their current car to make the switch. And they often just keep both: U.S. households with an EV have an average of 2.7 vehicles, compared with 2.1 vehicles for the country overall.

Another recent study on American driving patterns found that a household that replaces its secondary gas vehicle with an EV typically needs to own the car for more than 10 years before it offsets the emissions associated with its production.

“This is where the typical narrative gets problematic,” said Nunes, the Harvard economist who co-authored the report. “I don’t know anyone driving a 10-year-old EV. Do you?”

Americans, it turns out, are pretty bad at scrapping cars of any kind, and getting worse at it over time. In part because vehicles are so reliable these days, people are hanging on to them for longer. There are now 272 million registered vehicles in the U.S. for 228 million drivers. We have closets full of stale computers, drawers of dated iPhones and driveways and garages full of 5,000-pound frivolities.

There’s also a trend of drivers swapping one electric vehicle for another, according to Tom Libby, associate director of industry analysis at S&P Global Mobility. Most notably, Libby says a lot of drivers are ditching their Teslas for models from Lucid, Polestar and Rivian. Those brands are newer and more unique, and none of them are run by a political lightning rod.

While the U.S. recently established point-of-sale tax credits for EV purchases, Nunes argues that governments should incentivize driving EVs rather than just buying them. An electric car affords some privileges when it comes to parking and access to carpool express lanes, but Nunes envisions stronger financial subsidies.

“There are questions about the extent to which these vehicles can deliver on their green promises,” he says. “It’s not because the technology isn’t good enough; it’s not because the grid won’t get cleaner; it’s because so much … depends on how they’re used.”

At the moment, the most impactful kind of EV ownership looks like that of Jim and Maureen Holtan, who live in Oakland, California. The couple gave their old Nissan Cube to their son-in-law in early 2020, bought a Chevrolet Bolt and promptly drove it to Phoenix and back to see if the technology was road-trip ready. “That was the point when we realized there’s no reason to drive anything else,” says Jim Holtan, 69.

This spring, when the catalytic converter was stolen from the couple’s second car — an old Ford Escape — they scrapped it and bought a second Bolt. “My wife was the original skeptic,” Holtan says, “and she said ‘It better be another electric car.’” In both cases, their EVs entirely replaced a gas-burning vehicle and they also drive quite a bit — collectively around 30,000 miles a year. Like the Strothers, they also charge them from home solar.

There’s evidence that the lumpiness in the EV market may smooth. Not only is there a parade of all-new electric options, they are getting larger and more capable. As they drive farther, carry more and even tow, battery-powered cars and trucks are making a strong case for serving as a family’s primary vehicle. And when prices come down, they will increasingly be an option for single-car households and those still piloting clunkers.

In the meantime, Nunes has simple advice for climate-conscious drivers: “If you want to buy an EV, drive it into the ground.”