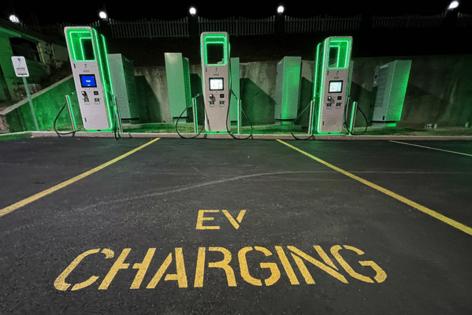 PHILADELPHIA — It seems as if every other car commercial these days is hawking an electric vehicle, and most major automakers have committed to aggressively switch production to EVs. But it’s still very early in the transition away from internal combustion engines: EVs made up less than 1% of the registered vehicles in Pennsylvania at the end of 2021.

Anticipating a future wave of EV ownership, the Pennsylvania Public Utility Commission on Thursday launched a process to potentially rewrite electric rates in the state to accelerate the adoption of EVs and to assure that electricity costs are proportioned fairly among customers.

The commission said it is trying to stay ahead of what could become a tumultuous transition for the electrical grid as motorists switch to electric cars.

“To ensure this commission maintains a nimble posture ahead of this electrification transition, it is imperative that we research and consider rate designs that advance effective management of energy and infrastructure costs,” they said.

By a 5-0 vote, the PUC approved a measure to create a working group that will recommend potential changes in rates for electric vehicle charging. The working group, which must report back by March 31, 2023, will include consumer advocates, electric utilities, EV advocates and PUC staff.

The commission’s action, which was initiated by a petition in February from a coalition of electric vehicle advocates called ChargEVC-PA, would address potential rate increases caused by costly grid expansions to meet growing electric charging demand, making EVs less attractive and harming customers who don’t have EVs.

Peco Energy, which serves 1.6 million electric customers in Philadelphia and surrounding suburbs, urged the PUC not to rush to make a policy statement on EV charging rates because the impact on the grid from EV demand is “limited” so far. Peco says its customers own about half the state’s total electric vehicles, which account for 29,000 of the state’s 12 million registered vehicles, according to the Pennsylvania Department of Environmental Protection.

“Although Southeastern Pennsylvania is home to roughly half of the battery electric vehicles currently registered in the state, the company has not yet identified any systemwide grid impacts related to EV adoption,” Peco said in a filing with the PUC.

Debates over electric rate designs can become intense as expert advocates for various interest groups maneuver for advantages. The state and the courts generally disapproved of cross-subsidies between customer classes.

Commissioner Ralph V. Yanora, while voting for the measure to create a working group on EV rates, added a note of caution that new rates should be market-based and “not include subsidies.”

One possible solution is to create rates designed to encourage EV owners to charge their vehicles during off-peak hours, when the existing electric grid is underutilized. A more efficient use of existing infrastructure could benefit all customers, including those who don’t have EVs, and also boost the revenue for utility operators, experts say.

Peco last year launched residential time-of-use rates for customers who can manage the electric usage — the price is steeply discounted from midnight to 6 a.m., but about twice as high from 2 p.m. to 6 p.m. on weekdays. About 1,306 customers have enrolled in the voluntary program, Peco spokesman Brian Ahrens said Thursday.

Although EVs are a relatively small part of the market now, nearly all manufacturers have committed to major investments in electric vehicle manufacturing. The federal Infrastructure Investment and Jobs Act of 2021 includes $7.5 billion to support a nationwide buildout of charging stations on highway corridors. And EV sales are expected to be 25% to 30% of total new-vehicle sales by 2030.