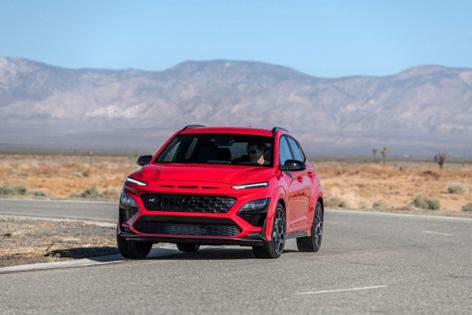 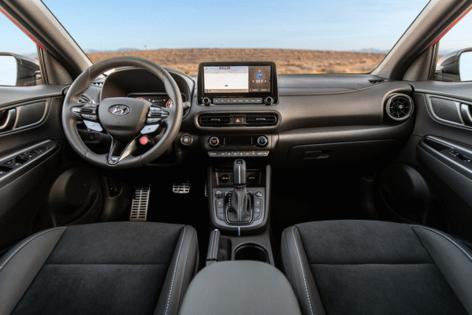 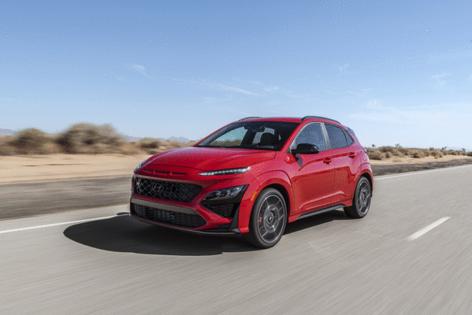 BMW makes an M-azing, M-asterful M3 sports sedan with gobs of horsepower, tires made from Superglue and a taut suspension. It’ll also cost you an M-azing 80 grand. For those who don’t need the full magilla, there’s the BMW M-line which offers M3-like style but without the nuclear power plant under the hood. M style without the M-egaprice.

The Hyundai Kona has decided to get in on the act.

Right next door in the alphabet, the Kona N offers a fire-spitting hot hatch with a loud 286 horsepower, stiff springs, $35K sticker price and N-grin launch control that’ll crush your spine into the seat on its way to 4.9-second zero-60 launches. Sound like fun? No?

Then the Kona N-line might be your cup of Kia with all the N’s styling cues and just enough horsepower — 195 — to make it interesting. Heck, it almost fooled me when I picked my tester up at the airport on a cold April evening.

The N comparisons stop when you put your boot in it.

VROOOOM-NAHHHH, I don’t think so. Despite an upscale, dual-clutch transmission hooked up to the four-banger under the hood, the engine lacks urgency. I confined my enthusiastic driving to 90-degree turns where the N-line rotated nicely before setting off for ... the autocross course? No, the grocery. There the Kona showed off its hatchback utility.

However, for a stiff $31K, the N-line made my mind wander to the $20,995 Elantra in the Hyundai aisle. You want affordable style?

At a whopping $10K south of Kona, the Elantra is a much more head-turning vehicle and is loaded with more modern amenities. I’m talkin’ standard wireless Apple CarPlay/Android Auto, blind-spot assist, and auto tranny. And Elantra has its own N-line for 2022 that uses the same turbo-4 as Kona N, and is $1,400 less than the Kona. Uh-oh.

They say Americans don’t like sedans, but the Elantra has significantly more rear legroom for basketball players like me, and that trunk — well, it's not a hatchback but it will swallow plenty of groceries.