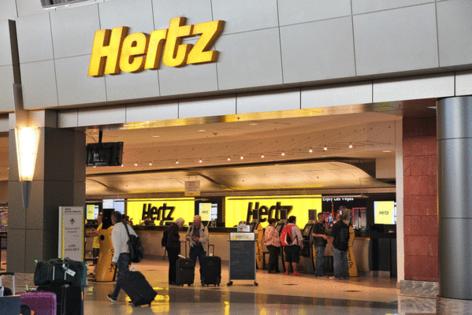 Hertz will offer GM EVs across all brands: Chevrolet, Buick, GMC, Cadillac and also BrightDrop, with first deliveries of the Chevrolet Bolt EV and Bolt EUV expected in the first quarter of 2023

The companies believe this move "is the largest expansion of EVs among fleet customers and the broadest" since it will include vehicles from multiple segments at varying price points.

The partnership with Hertz isn't surprising and could be one of several involving GM. In May, The Detroit News reported GM was in talks with multiple rental car companies, including Hertz.

During GM CEO Mary Barra's keynote speech at the Consumer Electronics Show earlier this year in Las Vegas, Enterprise Holdings, a major rental car company with the brands Enterprise, Alamo and National, expressed interest in the Chevrolet Silverado EV, which will be available next year.

Hertz made a splash last fall when it announced it would offer "the largest EV rental fleet in North America and one of the largest in the world" with an initial order of 100,000 Tesla electric vehicles. The company hired former Michigan quarterback and NFL star Tom Brady to market the $4.2 billion deal.

Hertz already has tens of thousands of EVs available to rent at 500 Hertz locations in 38 states. Its goal is for 25% of the fleet to be electric by the end of 2024.

GM intends to increase deliveries to Hertz as it rapidly scales EV production between 2023 and 2025. The Detroit automaker plans to have annual production capacity of 1 million EVs in North America by 2025.

Q: I have a 2008 Chrysler Town and Country that I purchased new. I also purchased the Chrysler Lifetime Maximum warranty. The ABS, BRAKE, ESP/BAS, ANTI-SKID warning lights came on. My dealership inspected the vehicle and ...Read More

It has been awhile since Infiniti has gotten it right, but with the recent redesign of Nissan’s Pathfinder, the Infiniti QX60 had no choice but to be good.

Tesla Inc. is recalling almost 81,000 electric cars in China — more than it typically ships from its Shanghai factory in any given month — due to a software issue and seat belt problems.

The US EV maker will call back...Read More

The California Public Utilities Commission has approved a $1 billion vehicle electrification charging project, with most of the money earmarked to accelerate the number of midsize- and heavy-duty trucks on the state's ...Read More