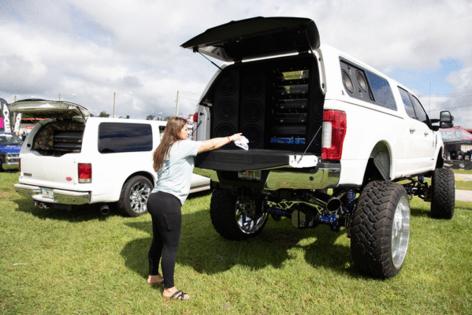 PLANT CITY, Florida — Seeking respite from the afternoon Florida sun, Joe Petty clambered inside his 2017 Ford F-350, turned on the air conditioning and took stock of his creation.

He bought the truck in 2019 and has since poured in thousands of dollars and untold hours. It is glossy black with trim in “Blue Lives Matter blue,” he said. The same shade as his T-shirt. Color-changing lights line the wheels. His last full tank of gas cost $180.

Beyond his windshield stretched hundreds of other souped-up cars (lights flashing, speakers blaring) and spectators who had flocked to Plant City for the second annual Lifted Florida, a truck show celebrating the unapologetically big and bold. Add beautiful to that roll call, some say. Others prefer brash.

“It’s about having a good time for a good cause,” said Rigo Avila Jr., an organizer of the event held in the far eastern reaches of Hillsborough County over the weekend. Proceeds from the raffle are donated to the Kids Cancer Foundation. Avila, a Tampa-based Realtor, and three others launched the event because they spotted an unmet local appreciation of vehicles large and lifted.

The celebration of America’s appetite for high-riding gas guzzlers comes at a time of soaring traffic fatalities and calls for stricter safety regulations that account for the danger that large vehicles pose to others on the road.

Unlike virtually all other developed countries, where such traffic fatalities declined during the past decade, the United States has seen an increase of about 30%. Researchers have pointed to our penchant for all things super-sized as part of the deadly problem. Big cars are often safer for the occupant, but not for those outside.

To those devoted to remaking their rides, like Petty, who traveled to the show from Sumter County, every painstaking modification is a point of pride and practicality.

“I guess you could say I like the attention,” he said, adding that the car allows him to haul the large camper he needs for work. “I get compliments everywhere I go.”

Across the field, a crowd had formed around a 1997 Jeep Cherokee, speakers booming. A dozen leaned their weight against the vehicle. The goal? To keep it as rigid as possible in the pursuit of recording the loudest sound with the vehicle’s audio system.

Atop sat its owner, 29-year-old Bubba Brewer, clad in a bubblegum pink T-shirt and chewing tobacco, the sound infiltrating his bones. He owns a stereo shop in Lakeland, Florida. This is both a hobby and a job.

It has been awhile since Infiniti has gotten it right, but with the recent redesign of Nissan’s Pathfinder, the Infiniti QX60 had no choice but to be good.

Tesla Inc. is recalling almost 81,000 electric cars in China — more than it typically ships from its Shanghai factory in any given month — due to a software issue and seat belt problems.

The US EV maker will call back...Read More

The California Public Utilities Commission has approved a $1 billion vehicle electrification charging project, with most of the money earmarked to accelerate the number of midsize- and heavy-duty trucks on the state's ...Read More

Fifty years after it last appeared in the United States, the 2023 Toyota Crown returns to the U.S. market as a replacement for the 2022 Toyota Avalon, which tried mightily to shed its stodgy image as a geezer pleaser in ...Read More

SOUTHFIELD, Michigan — The Acura NSX is galloping off into the sunset in style. For its last model year, the NSX gets a Type S performance model with 600 horsepower, carbon-fiber roof, sticky Pirelli P Zero PZ4 tires and...Read More