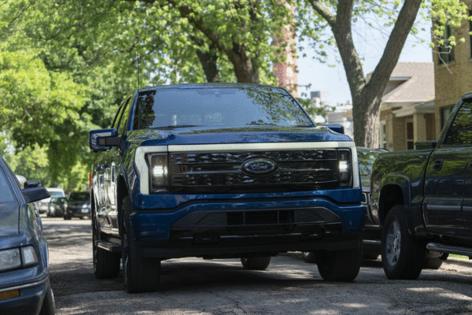 Electric vehicles weigh more than their internal combustion engine counterparts, and that has implications for maintenance, safety and even pollution.

The additional weight of EVs is a challenge for automakers today looking to increase at least half of their sales to be all-electric by the end of the decade. They see the prices increase on raw materials and fear a shortage of them in the future. EV batteries require structures that can hold the additional pounds. But the heavier vehicles also have implications for owners and, some say, society, too.

Take Ford Motor Co.’s F-150 Lightning pickup, which starts at 6,015 pounds. That’s 22% more than the 4,950-pound curb weight, which includes a full tank of gas, of the equivalent traditional F-150. Meanwhile, the starting weight of an electric Hyundai Kona is 28% heavier than the gas-powered model, and the Nissan Leaf is 35% heavier than the starting weight of its gas-powered equivalent, the Versa.

That's a challenge for automakers. For customers, other drivers and other users of the road, here is what to know:

Without transmissions or the need for oil changes, EVs have fewer maintenance needs than ICEs. Some EV owners, however, do report having to replace the tires on their vehicles sooner than on a gas-powered vehicle.

Steven Misrack of San Diego is on his second Chevrolet Bolt, opting to replace his 2017 model for a 2020 for the improved range. He previously replaced the four tires on his '17 Bolt for around $700 after 30,000 miles. On his previous Toyota Tacoma truck, he'd gotten past 50,000 miles.

"The (Bolt) tires have low rolling resistance, so they wear out faster, but I'm getting better range because of it," Misrack said. "They were the same price for off-road tires on the truck. It was a little bit surprising."

He's doing less highway driving, but more city driving in the '20 Bolt and suspects he'll have to replace the tires on it before the end of the year, when he expects to hit around 20,000 miles.