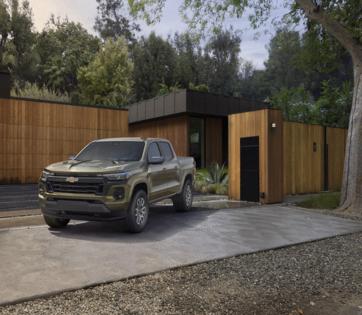 The Chevrolet Colorado is getting an extreme makeover.

General Motors’ mainstream brand unveiled an all-new, 2023 model of its mid-size pickup truck that expands in length, interior tech, and model trims even as it shrinks its engine and bed options. Responding to America’s thirst for all things off-road, the Colorado lineup will add a rugged Trail Boss trim to its lineup of base Work Truck, LT, Z71, and ZR2 models.

The Colorado is Chevy’s starter truck and the 2023 model benefits from hand me-downs from big brother, full-sized Silverado — most significantly the 2.7-liter turbo-4 engine that is now the core of the lineup as well as a modern, dash-mounted, 11.3-inch digital touchscreen. As GM pours capital into an uncertain, all-electric future, its gas-fueled truck lineup is key to profitability and the Colorado — like Silverado — is loaded with new trims and features that can goose sticker prices over $50,000.

“The all-new Colorado is enhanced in every way,” said Chevy vice president Scott Bell. “With its rugged and sporty styling, enhanced capability, new technology and customization options, it’s designed to do more for discerning customers.”

Those discerning customers embraced the last-generation Colorado’s crisp handling — a signature of Chevy trucks — as well as its tree-chewing ZR2 model. Customers also noted the truck’s dated, plastic interior and base engine offering, and fixing those shortcomings is high on the list of 2023 upgrades.

“While the interior is overrun with cheap plastics, and even the biggest cab size has a small back seat, the truck maintains a pleasant driving position and athletic handling,” noted auto enthusiast magazine Car and Driver of the outgoing model. “Colorado has a good enough resume to suit many pickup shoppers, but it lacks the qualifications to interest a wider audience.”

That wider audience has an array of choice in a segment that has expanded significantly since Colorado was introduced in 2015. There’s sister GMC Canyon as well as Ford Ranger, Jeep Gladiator, newly-redesigned Nissan Frontier and perennial sales-leader Toyota Tacoma. In addition to these ladder frame bruisers, the midsize segment has added unibody pickup like the Hyundai Santa Cruz and Honda Ridgeline. In 2021, the GM twins sold 97,133 units — second only to the Taco’s 252,520.

To stay ahead of the stampede, the ‘23 Colorado brings a significant interior makeover with standard, high-resolution, configurable, digital instrumentation alongside biggest-in-class infotainment screen. The setup mirrors a Silverado dash that itself was remade for the 2022 model year. The touchscreen upgrade includes a new Google-based software system that will make smartphone users feel right at home when using features like maps and music. The 2023 model will also offer a sunroof for the first time.

“Across all trims, the exterior’s presence and attitude is reflected in the interior, which is designed around the large center stack screen,” said design boss Phil Zak.

The Colorado sits atop a ladder frame redesigned for better interior space and dirt-chewing. Chief engineer Nick Katcherian said the truck gains 3.1 inches in wheelbase — some of which goes to increased rear legroom — as well as a front axle that has been moved forward for better approach angle.