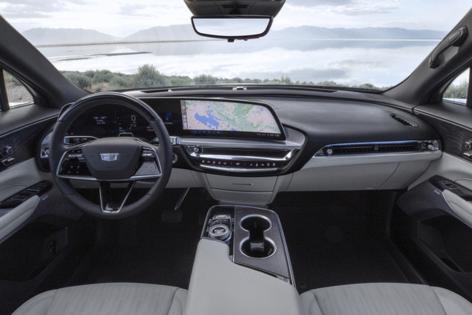 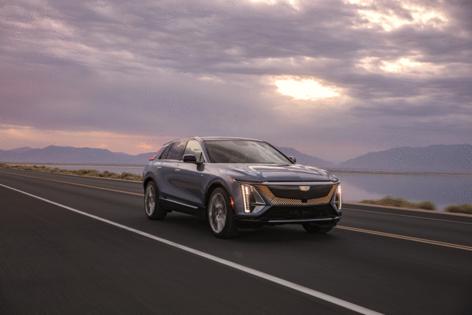 Certainly, Cadillac sells some excellent rides, such as their new high-performance Blackwing models. But the company has long struggled to regain its former luxury market dominance. It's a crowded and competitive field, and Cadillac executives have marked the brand’s transition to an all-electric lineup for its reemergence. This makes the Lyriq their most important product in years, and the first true Cadillac since the debut of the second-generation CTS sedan, coupe and wagon in 2003.

The Lyriq’s excellence is evident in its engineering, design and execution, with GM sweating the details like few cars in its current lineup.

Nearly identical to the concept vehicle that spawned it, the Lyriq’s look is fresh and modern, particularly its fascia, which uses a unique lighting design that includes vertical LED front lights and a subtle Cadillac heritage grille shape that’s fresh. The overall body has short front and rear overhangs, and its standard 20-inch wheels give it a proper stance, while the tautly drawn sheet metal looks both refined and modern. The sloping rear of the vehicle is a little busy, but its lighting is distinctly Cadillac, even if its shape is new.

As with most battery electric vehicles, the Lyriq is built using a skateboard-style platform that places the batteries and driveline between the frame rails and below the floor, allowing for a spacious cabin thanks to the lack of a transmission tunnel down the center of the cabin. (Electric vehicles have motors at each axle, there’s no need for one.)

The interior detailing is impressive, with design details that distinguish this car from past Cadillacs. Unlike other Caddies stretching back decades, there are no interior — or exterior — components shared with any other GM vehicle. There are lots of knurled knobs and flat touch surfaces that activate different vehicle functions. But they must be physically pushed; you can’t activate them by casually brushing against them. Even when there are physical buttons, such as the toggles for the temperature control, the small arrows next to the temperature readout jumps up or down depending on whether you changed the temperature up or down — one of the many thoughtful extras you’ll discover as you drive the vehicle. And you’ll want to drive the vehicle.

The driver faces a custom 22-inch LED display that houses the instrument cluster and the infotainment system, which runs on Google’s new automotive operating system, as well as wireless Apple CarPlay and Android Auto, a Wi-Fi hotspot, Qi wireless charging and an impressive AKG sound system. It all worked flawlessly and quickly. The same can be said of the driveline.

While GM plans to offer all-wheel drive versions of the Lyriq with a motor on each axle, the initial model has one motor driving the rear wheels, powered by a 100-kilowatt-hour lithium-ion Ultium battery pack. It generates 340 horsepower and 324 pound-feet of torque, and goes from 0-to-60 in approximately 6.5 seconds. The all-wheel-drive model, which is expected to go on sale next year, is expected to produce 550 horsepower. The rear-wheel-drive model runs for an estimated 312 miles on each charge and can recharged at a rate of 76 miles in 10 minutes using a fast charger.

But when it came time to drive, the Lyriq feels faster than GM’s estimates, thanks to its EV driveline. Like other EVs, all of the torque is available instantly, endowing it with a sense of speed off the line. The Lyriq’s battery pack endows it with a low center of gravity that undoubtedly improves its handling thanks to its adaptive suspension. It remains flat in corners and ensures that passengers remain comfortable by ably soaking up the rough stuff our nation’s crumbling infrastructure typically dishes out. And, like a college library on a Saturday night, it’s incredibly quiet, an ambience enhanced by loads of sound deadening, insulated side glass and active noise cancellation.

It all adds up. The Lyriq is a surefire hit, with an impeccable design, world-class engineering and a refined demeanor you would expect of a luxury SUV. In fact, the 2023 Cadillac Lyriq is so good, you might be tempted to call it The Standard of the World.