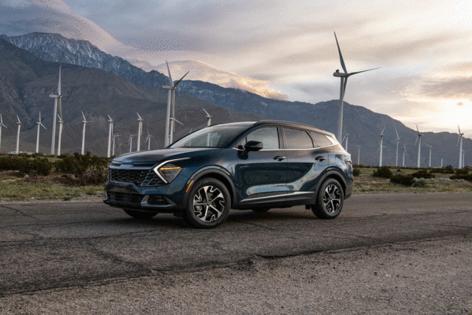 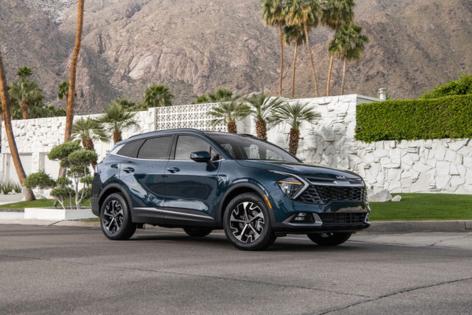 The new 2023 Kia Sportage isn’t so much a car as it is a Universal Studios theme park attraction: an affordable look at the latest auto technology that you can do with the whole family: huge screens, semi-autonomous driving, red leather, hybrid-electric power.

My Matte Gray (yes, Matte Gray in a $38,000, non-luxe car) tester looks like it was sketched by a Hollywood designer.

The front is all grille, chrome accents and LED light bars — the headlights pushed to the very edges of the fascia. It’s a stark contrast with the previous-generation Sportage and its anthropomorphic features. The ‘22 Sportage was a cutie, its big eyes and happy mouth — er, grille — seemingly inspired by Pikachu from the Pokemon family. The new Sportage looks like something from the Tron movies.

“Is that from the future?” my neighbor John commented as I rolled past his driveway on my way up north for a long road trip to enjoy the Kia’s featured attractions.

While it must conform to the traditional layout of four-door SUV, Sportage challenges styling convention. Sister Hyundai has done the same with its angular Tucson ute, which is built on the same platform as Sportage. The Kia’s rear is nearly as intriguing as the front with a wedding cake construction that separates rear window, taillights, license plate panel and diffuser into four planes. The whole sculpture sits under a fashionable floating-roof design.

For all its design ambition, however, my Sportage tester was quite practical. It sat on high-profile, 18-inch wheels with a useful, Wrangler-like 8.3 inches of ground clearance should I encounter a typical northern Michigan dirt road.

The long drive up I-75, however, was anything but typical.

The Sportage has the best semi-autonomous system this side of Caddy’s Super Cruise and Tesla’s Autopilot. I’m not making this up. Like Super Cruise (and unlike Autopilot) the system has no interest in nannying me all the time.

Unlike those sophisticated systems, Kia doesn’t give its adaptive cruise feature a fancy name and it won’t self-navigate to your destination (so it won’t automatically switch lanes in the process). Otherwise, it allowed me to relax, assume a chair-like seating position (hands on my knees) — only reaching for the steering column when another car got in the way.

The radar brick in the front grille read cars in front of me, slowing down from my set speed of 79 mph as I approached. Assuming the controls, I turned on the blinker, drove around them, then settled back into hands-free driving. The cameras kept the car centered, even in long interstate curves. While Tesla’s Autopilot nannies me every 30 seconds to apply torque to the wheel (making sure I’m paying attention), the Kia system left me alone, rarely asking me to affirm my presence.