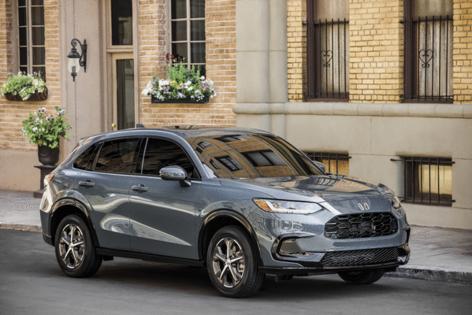 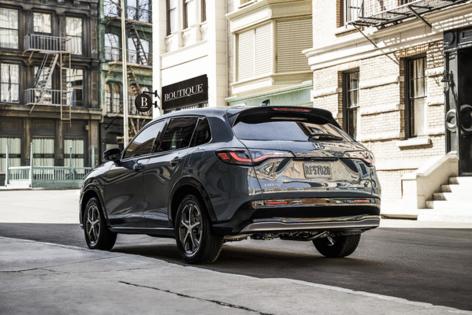 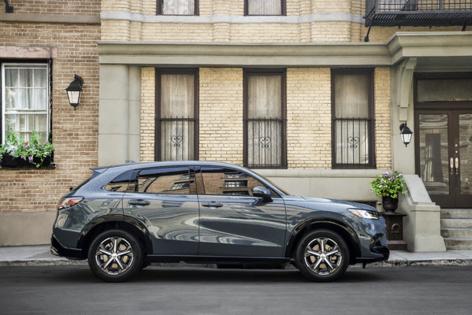 Would you guess that Honda offers the highest number of American-made cars offered in the U.S.? Probably not. But more than that, their models are designed specifically for the American market. Just consider today’s subject, the all-new, redesigned 2023 Honda HR-V.

Offered in base LX, mid-level Sport and top-of-the-line EX-L trim levels, the 2023 HR-V is significantly larger than before, having grown 9.4 inches in length and 2.6 inches in width. But there’s a maturity to the new HR-V that was somehow lacking in the previous version, no longer resembling the overgrown hatchback that it was. In fact, the new HR-V is larger than the first generation 1996 CR-V, and about the same size as the second generation 2002 model. Strangely, the added size only adds about one cubic foot of cargo space, and has less when you fold the rear seats. Passenger volume also decreases to 98.7 cubic feet from 100.1 cubic feature. So, it's bigger on the outside and smaller on the inside.

Its added size comes from its use of the latest 11th-generation Civic platform, rather than the Honda Fit architecture employed for the first-generation and new overseas HR-V, dubbed the Vezel in Japan.

But that switch in platforms also brings about an upgraded interior. No longer a snug pseudo crossover awash in cheap hard plastics, the 2023 HR-V retains the simple, spartan functionalism that’s classically Honda.

The EX-L’s cabin features soft-touch and perforated leather-like seats at the edge of the instrument panel and perforated leather-like seats help you forget the hard plastic door panels. But they do have room for two beverage bottles. Despite the reduction in interior space, the HR-V feels roomier inside, with ample room for tall drivers behind the wheel and generous adjustability for both the driver’s seat and the tilt telescopic steering wheel. The top of the center console is rounded and padded, making for a comfy perch to rest your right leg while driving. But while the driver gets power seat adjustments, the front passenger makes do with a manual recliner. Rear seat space is good, but the cushion is low and flat and lacks a center armrest.

The tech package mirrors that of the new Civic, there’s a large space for wireless smartphone charging and a second spot for wired charging. The test cars featured two USB-A and USB-C chargers. Customers who purchase the base LX trim get a fairly basic 7-inch touchscreen. Apple CarPlay and Android Auto are included when upgrading to themed-level Sport trim. The top EX-L model has a far better 9-inch high-definition display that supports wireless CarPlay and Android Auto, an eight-speaker music system and Qi wireless smartphone charging.

As you’d expect given its Civic roots, The HR-V gets a new 2.0-liter inline four-cylinder engine that generates 158 horsepower and 138 pound-feet of torque, an increase of 31 horsepower and 11 pound-feet over the 1.8-liter inline-four found in the first-generation CUV. A continuously variable transmission is standard and is offered with either front- and all-wheel drive.

Power is sufficient when the driving mode selector is set to Normal, and noticeably more enticing when the shifter is in Sport mode. But the CVT can’t be shifted manually to extract the most fun. Nevertheless, most drivers will find it well behaved, without the whine and lag that afflicts too many CVTs. You can still drive it with some gusto when the road warrants, as it lacks the previous HR-V’s excessive turbo lag off the line and its gooey “motorboating” as the CVT rushes to catch up with the engine.

Best of all, the driveline is far less buzzy and markedly more refined.