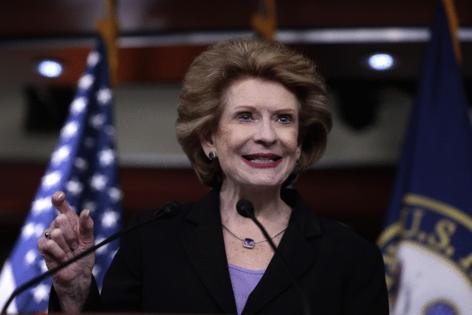 WASHINGTON— A controversial proposal that would have given consumers a $4,500 discount on domestic, union-made electric vehicles is officially off the table, Sen. Debbie Stabenow, D-Michigan, confirmed Wednesday to The Detroit News.

Sen. Joe Manchin, a centrist Democrat from West Virginia who wields vast influence over his party's legislative priorities, has been publicly skeptical of the added tax credit for months.

On Tuesday, he told Bloomberg that the union provision is "gone" from the pared-down climate package he is negotiating with Senate Majority Leader Chuck Schumer, D-New York, and other top Democrats.

The policy written by Stabenow and Democratic Rep. Dan Kildee of Michigan originally would have raised an existing federal tax credit for electric vehicles from $7,500 to up to $12,500, including the $4,500 incentive to buy vehicles assembled in a union facility and $500 for vehicles with a battery manufactured in the U.S.

It also would have eliminated a 200,000-vehicle-per-manufacturer cap that General Motors Co. and Tesla Inc. have already met, and which Toyota Motor Corp. is soon to hit. GM, Toyota, Ford Motor Co. and Stellantis NV wrote a joint letter to congressional leaders last week urging them to lift the cap in Democrats' package.

Stabenow declined to say where Manchin stands on lifting the cap, saying it's not "helpful at this point" in negotiations.

"I certainly hope" the rest of the proposal survives, she added. "It's critically needed as part of the effort to support more EV purchases."

Brian Willis, a spokesperson for the Zero Emission Transportation Association, which advocates for policies to accelerate EV sales, also said that the policymakers are currently only considering lifting the 200,000-vehicle cap, not the $5,000 in additional credits.

Manchin's office did not respond to a request for comment Wednesday. Senate Democrats are attempting to reach a compromise on a thinned-out version of President Joe Biden's climate package that Manchin declared dead at the end of last year. Leaders are hoping to strike a deal before a monthlong recess begins on Aug. 8.

Electrified vehicles made up less than 10% of all new car sales in 2021, according to Cox Automotive. But they're rapidly growing in market share, and auto consulting firm AlixPartners estimated Wednesday that EV sales will reach 33% worldwide by 2028.

Supporters of the original proposal — which included Stabenow and Kildee as well as Biden, the United Auto Workers union and environmental groups — argued the expanded credit is needed to make EVs affordable for more people and to accelerate sales with the goal of cutting emissions.

But Manchin has called the proposal "ludicrous," argued it picks "winners and losers" among the automakers, and raised concerns that the EV supply chain is overly dependent on other countries, including China. Republican members have voiced similar concerns, saying EV proposals would largely benefit wealthy Americans who can afford luxury vehicles.

And major trading partners such as Canada and the European Union raised concerns that the leg up for domestic production would discriminate against EVs produced in their countries, harm the international auto supply chain and, in Canada's case, violate the U.S.-Mexico-Canada trade agreement.

Canadian Prime Minister Justin Trudeau visited the White House in November to lobby against the proposed credit and reportedly failed to change Biden's mind on the issue.

The electric-vehicle maker's Model Y and Model 3 were No. 1 and No. 2, respectively, on the ...Read More

A Ford Motor Co. plant in Valencia, Spain, is poised to become the automaker's next electric-vehicle manufacturing base in Europe.

The company said Wednesday it has selected the Valencia facility as the "preferred site" ...Read More

The company will ...Read More

Q: My 2014 Jeep Grand Cherokee suddenly developed a clunk downshifting at a stop sign. Then, at the next stop sign, even my wife heard it. Took it to my local garage here, who I have great trust in, as they have saved me a...Read More

Amid rising commodity costs, General Motors Co. is upping the price on its GMC Hummer EV pickup and SUV by $6,250 starting June 18.