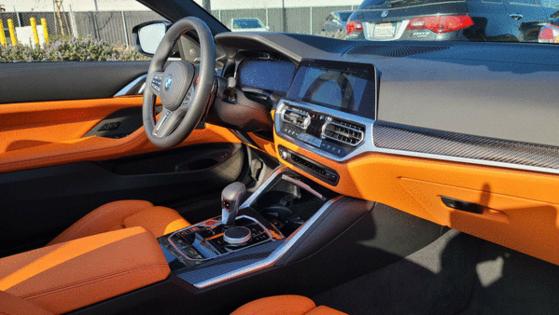 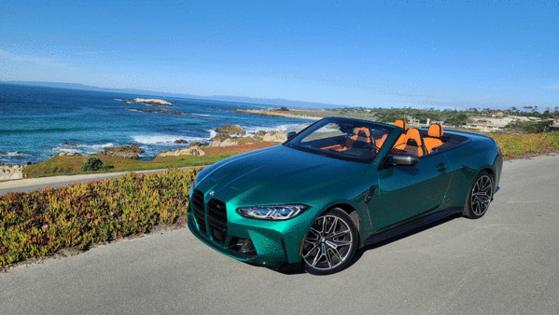 The route is not only one of the most beautiful stretches of road in America, it’s also home to Pebble Beach Golf Links and high-priced homes with big garages and spectacular views of the Pacific. Cool cars and trucks come out to strut their stuff along the route despite the low 25 mph speed limit and $20 toll.

BMW’s M-performance hellions are the first to sport the brand’s huge, hood-to-chin twin kidneys. You can see them from space and they are the new BMW status symbol.

A white M3 (the sedan version of the two-door M4) looms in my mirror, its huge nostrils sniffing at the earth like an enraged bull. It’s intimidating even at 25 mph. I pull over at a beach overlook, and the M3 cruises by with a toot of the horn and a hearty “Like your car!” from its passengers. Further along the route an another topless M4 convertible — my mirror-image save for its blue paint scheme — rounds a bend. Thumbs-up exchanged. Members of the German tribe way out here on West Coast, USA.

BMW is at home as much here in California as it is in Deutschland, a testament to years of consistent brand management. Its status as top-luxe dog is under attack, however, from home-grown (now Texas ex-pat) electric-automaker Tesla. Muscular, expensive examples of the Model Y/ Model 3/Model S/Model X are everywhere along 17 Mile.

Tesla doesn’t make convertibles, though. And they don’t growl, either.

When 17 Mile ends, Route 1 begins — the coast’s legendary, twisted two-lane where sports cars come to play. It was a cool 50 degrees in the Bay area, but I cranked up the heat in the BMW’s cockpit and kept the convertible top down to hear the twin-turbocharged inline-6 howl.

No one mixes a smooth, inline-6 cocktail better than Bimmer. I first enjoyed it in the spine-tingling 8,000-rpm E46 M3 that once graced my car stable. To keep upping the power — and satisfy government regulators at the same time — BMW strapped on turbochargers in subsequent models. They have taken the edge off the beast’s howl. Caged further by sound-deadening materials, the engine can feel remote in the M3 sedan — a reason to get the droptop despite its greater weight. And lesser trunk. Beware suitcase travelers: stowing the roof takes up half your boot.

Like entering hyperspace, the BMW cockpit must be prepared for maximum performance.

2. Access the console M-mode button, which transforms the instrument display behind the wheel (and huge head-up display) into a race car-like tachometer. It’s one of my favorite features. With the tach hovering over the hood, I never have to take my eye off the road as I toggle between gears.

3. Thumb the M1 (or M2) steering preset on the steering wheel which I had programmed not only to turn up the engine volume, but to slam the car to the pavement, a quivering mass of muscle ready to burn up the tarmac.

I obliged M4’s base instincts.

WAAAAUUUGH! I buried the throttle and four all-wheel-drive hooves dug into the road, propelling the M4 into a series of twisties. As we galloped further south, traffic thinned — sandy beaches giving way to severe, rocky coastline. The M4’s 503 horses are titanic, too much for this tight road. Like other performance cars today, its limits can’t be reached unless taken to a race track.

M4’s little brother, the M2 (the natural heir to my 2001 M3 with similar wheelbase, weight and power) is the better corner-carver. Get it to push road limits and attend track days.

Still, the Monterey coast is the M4 convertible’s natural habitat, a place to show off its broad, touring-car talents. Though the M3 and M4 once defined the brand’s handling prowess, that is now left to M2. The open-air M4 is the brand’s showcase for technology, looks, power. It’s as comfortable sprinting along coastal Route 1 as it is turning heads on 17 Mile. Think of Traverse City’s lovely coastline in summer.

I picked up Mrs. Payne from our hotel and headed inland for lunch and sightseeing. Destination: Laguna Seca Raceway in the picturesque Laguna Valley.

My wife fawned over the orange interior. Bright interiors are the rage these days, and I’ve lounged in red seats from the $34,000 Mazda3 Turbo all the way to the blue $140,000 Aston Martin DBX. M4 orange was spectacular and comfortable, though the M4 is tight on the rear seat legroom for us 6-footers despite its wheelbase expansion beyond little brother M2.

My wife quickly synched her Apple CarPlay. BMW is also generous in synching the phone app directions to the driver instrument display, a rare feat. We set sail for the Laguna, the west coast’s most famous track, settling in for an easy drive on adaptive cruise-control during a busy Monterey lunch hour.

BMW is content with a standard Level 2 autonomous system — not pushing the envelope (for now) like Tesla and its ambitious Autopilot system. Tesla’s cutting-edge tech has wowed a new-gen of luxury buyers and helped establish its status above Bimmer in this high-tech state. Autopilot might have helped us as we approached one of California’s sudden four-lane traffic pile ups. The BMW’s system was unable to stop in time, and I had to take over to avoid the car in front of me as I slammed on the brakes.

We arrived at Laguna and I immediately headed to the legendary Corkscrew turn at the track’s summit. The view is spectacular and made for lovely pics of the green BMW against the painted-perfect blue sky.

Our visit coincided with a track day organized by On Track, and the event had attracted the cream of the performance crop: Lamborghini Huracan, Porsche 911 and Boxster, Tesla Model S, Mazda Miata. But I didn’t see any new M3s or M4 — only current M2s and older M3s.

Right on brand for the new M lineup.