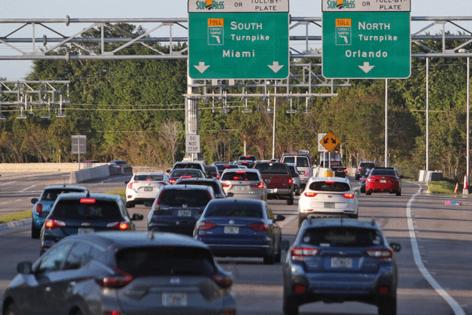 The tally, based on the website’s True Cost of Auto Insurance in 2022 annual report, compared what 40-year-old drivers with clean driving records and good credit pay across all 50 U.S. states and Washington D.C.

In a dollar-for-dollar comparison, Florida drivers pay an average $2,762 a year for what Bankrate describes as full coverage. The most expensive state was New York, where the same driver pays $2,996 a year. Louisiana was number three at $2,864. Drivers in Maine, the lowest-cost state, paid an average $876.

Auto insurance costs in busy, litigious, congested South Florida are even higher than the state average, Bankrate’s report shows. In the metro region composed of Broward, Palm Beach and Miami-Dade counties, the average premium was $3,508.

Rates were calculated based on assumptions that each customer drives a 2020 Toyota Camry, commutes five days a week and drives 12,000 miles annually.

The state has historically come out near the top of auto insurance price comparisons, regardless of which organization produces the comparison. In 2018, price comparison site The Zebra found Florida was the fifth-most expensive state. A decade earlier, Florida’s average premium for liability coverage was second-highest in the nation, according to the Property Casualty Insurers Association of America.

Reasons Florida drivers pay so much include the state’s susceptibility to severe weather such as tropical storms, hurricanes and tornadoes, Bankrate.com’s Cate Deventer wrote in an April blog post. Deventer also pointed to the state’s high percentage of uninsured drivers — 20.4%. That means one out of every five vehicles on the road is driven by an insurance scofflaw, which increases costs for uninsured motorist coverage.

Mark Friedlander, director of corporate communications for the industry-funded Insurance Information Institute, also pointed to high levels of medical billing fraud related to staged crashes and the state’s no-fault insurance laws, and a provision of state law requiring insurers to replace damaged or cracked windshields with no deductible.

“Contractors approach motorists at shopping centers, gas stations and car washes and offer to handle replacement of their damaged windshield in exchange for a gift card,” he said. “The motorist is asked to sign an AOB (assignment of benefits),” which gives the contractor the right to sue an insurer on behalf of the policyholder.

“Simple repairs are sometimes billed for thousands of dollars to insurers,” he said. “Many claims involve litigation filed against the insurer while the vehicle owner is not even aware a lawsuit has been filed.”

Auto insurance rates nationwide have increased after temporarily dropping when the COVID-19 pandemic forced people to stay home. Miles driven and accidents decreased sharply, and the auto insurance industry gave back about $14 billion in the form of cash refunds and account credits, Friedlander said.

But motorists quickly resumed their old driving habits after the economy reopened, and traffic fatalities also increased after decades of steady declines, he said.

Auto-related fatalities in Florida increased from 3,332 in 2020 to 3,629 in 2021, according to the Florida Division of Highway Safety and Motor Vehicles. That’s nearly a 10% hike that also boosts insurance costs and premiums, Friedlander said.

Inflation is also contributing to rate increases. “What we are now seeing are double-digit year-over-year increases in repair costs — driven by supply chain shortages of replacement parts and higher labor costs,” he said.

Rates are higher even than state averages in South Florida because of several factors, Friedlander said:

•Higher level of vehicle-related crime, such as theft and vandalism

While drivers cannot change those cost factors on their own, they can keep their own costs as low as possible by avoiding “life events” that can lead to significant rate increases, Bankrate.com’s study points out.

Allowing your credit score to decrease from “good” to “poor” can raise average auto insurance premiums in Florida by $2,715, the study shows.

Beyond avoiding such events, experts suggest a number of ways motorists can try to reduce their premiums. If you drive less than the average vehicle owner, you might look into policies that allow you to pay by the mile. Those typically require allowing insurers to monitor your driving through smartphone apps that connect to your odometer to record miles driven.

Other savings are available by buying and paying online, paying for your term all at once, and purchasing in advance.