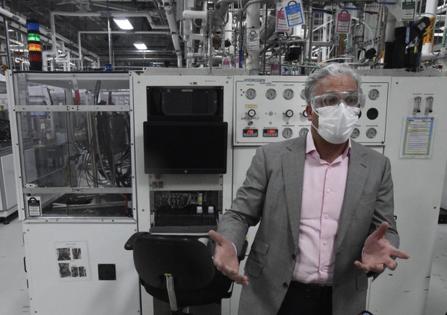 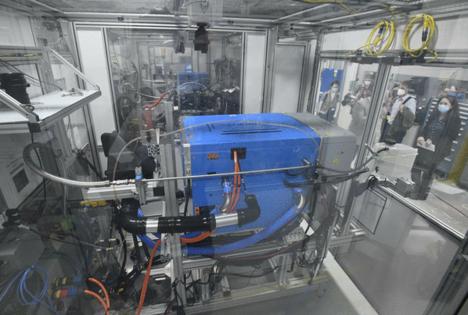 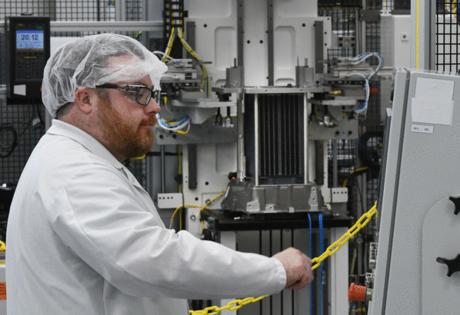 PONTIAC, Michigan — General Motors Co. may be relentlessly promoting an electric future with its sleek-looking EVs for retail customers, but for decades the automaker also has been developing hydrogen fuel cell propulsion technology — and now it's ready to start making money from it.

The movement to commercialization starts with the Hydrotec fuel cell lab and work areas in Pontiac that are three football fields large and neighbor other propulsion operations. It's here where teams collaborate to improve the technology that will be used to power larger modes of transportation from semis to trains, free of emissions.

About 300 employees are working on Hydrotec, GM's hydrogen fuel cell operation that aims to run like a startup while still being connected to the resources of America's largest automaker. The team has been working, mostly behind the scenes, for years to enhance this technology to offer another way toward a zero-emissions future — one that fuels much faster and weighs significantly less than an electric battery.

But in the last year, Hydrotec hasn't been so silent, announcing deals with major trucking and locomotive companies. Hydrotec also is gearing up for higher-volume production at a plant in Brownstown Township, Michigan.

The magnitude of this moment is not lost on Margarita Mann, senior manager for the Hydrotec fuel cell business. She's been working on the technology for most of her career since she started at GM in 2007.

"It's just been exciting for me because we work here day in and day out, but we don't realize how this is pioneering, groundbreaking, really," she said. "You know GM has been making cars for the last 100 years, right, but this is the first time ever that we're making a fuel cell. We don't take it for granted; we just keep on doing this work every day.”

'Not a one-trick pony'

GM has been working on fuel cells for decades, and has done demonstrations, but now those fuel cells, developed with Honda Motor Co., will be sent into real-world applications. The automaker foresees both technologies as avenues to a zero-emissions future as it continues to make internal-combustion vehicles for at least the next decade.

"The adoption for hydrogen, especially on the commercial side, is advancing quicker than anyone expected," Wedbush analyst Dan Ives said. "It's an opportunity for GM to monetize this area ... it gives them an advantage and it's a multi-pronged approach."

GM isn't alone in developing fuel cell technology. Stellantis NV last year in Europe began producing light-commercial vans that use hydrogen fuel cells and electric batteries to power the vehicles. The transatlantic automaker plans to import large versions of the vans to the United States starting in 2025. It has a heavy-duty hydrogen fuel cell truck in the works as well.

Last year, Hydrotec said its fuel cells would be used on a fleet of Navistar Inc. manufactured trucks that will be piloted this year by J.B. Hunt Transport Inc. Wabtec Corp. then announced it would use fuel cell systems in its locomotives and Hydrotec signed a joint development agreement with Liebherr-Aerospace to work on a hydrogen fuel cell-based electrical power generation system for aircraft.

GM already has shown in its demos that a fuel cell system can power a normal consumer vehicle, but the automaker recognizes fuel cells are better suited for larger applications.

"When you start trying to put heavy things ... liquids, steel, gravel on the big heavy haulers, that's where you're going to find that there's a big challenge to try to go to electric if you don't also have hydrogen in the technology portfolio," said Charlie Freese, executive director of GM's global Hydrotec business. "And so that's why we continued to put heavy investment into this all along because we saw that it was needed to really build out this overall portfolio."

Freese, GM's former executive director of diesel engineering, took over the program in 2008. His predecessor, Byron McCormick, had led the program since 1997 and advised executives about the capabilities hydrogen fuel cells could provide.

"I thought it was very important technology for GM to have," McCormick said. "It is complementary to batteries, it is not competitive with."

Under McCormick, the team developed a "strong" fuel cell technology and put it into Chevrolet Equinoxes for a demonstration called Project Driveway. When McCormick retired, the technology was ready to be commercialized, he said, but the lack of hydrogen fueling infrastructure held it back.

While that infrastructure is still not prevalent, GM is focused on providing fuel cell technology to applications with fixed routes. Meanwhile, its new Ultium battery technology can be used across a variety of consumer vehicles.

"General Motors is in a beautiful spot because by doing both of these things, they've got a portfolio of options they can balance ... General Motors is not a one-trick pony," McCormick said. "It can play the game, all the way across the board."

Hydrotec's projects are moving forward with the fuel cell lab at the center of making that happen.

Here, everything from the research and development on all the components of the cells up to pre-production, including validation and durability testing builds, is done for different applications.

"The lab itself is covering the full-value stream of development and engineering," said Betty-Ann Young, manager of fuel cell test and lab systems on a recent tour.

There's a section for single-cell testing and testing fuel cell stacks. The stack test area is where the electrode and a bipolar plate come together for the first time, connecting the cells in the stack to create power.

"It is the heart of the fuel cell. It is where we are looking to improve performance and durability," Young said. "As we successfully get through those tests, then we can scale it up and move through the lab."

A group of employees from across the fuel cells team gather every day to see what's happening across the operation. Folks running the lab, technicians, test engineers, product engineering teams and others work as an integrated team.

And what's developed and tested in this lab will go directly into what's built at the manufacturing joint venture operation, Fuel Cell System Manufacturing LLC, GM operates with Honda in Brownstown Township.

"It’s what we call a learning loop here. We test the product, we productionize it and we learn lessons, we send product back to Betty-Ann, she does the testing and all the diagnostic work," said Suheb Haq, president of Fuel Cells System Manufacturing, during the tour.

Collaboration continues in the ink and coating room, where the fuel cell electrode parts and manufacturing are developed. Those specialized on the process work with teams from R&D, manufacturing and engineering, design and product development for the electrodes.

The electrodes, fuel cell systems and Hydrotec power cubes created and tested in Pontiac also will be made in Brownstown Township, though GM hasn't said yet when that manufacturing operation will be open for production.

Employees at the lab in Pontiac provide information on their testing to the manufacturing operation and vice versa.

"We talk about no daylight, there's no daylight between the manufacturing team, the product engineering team and the operations team," Young said. "We are hand-in-hand developing part and process and furthering the technology quicker because of it.”

While the fuel cell organization acts like a startup, it's also part of a much larger organization, which is helpful for growth, Haq said: "Whatever issues, we run to different experts within General Motors, which gives us a competitive advantage because we've been building engines, transmissions and batteries for a number of years, and we can take those experiences and leverage them to accelerate the development of the fuel cell systems.”