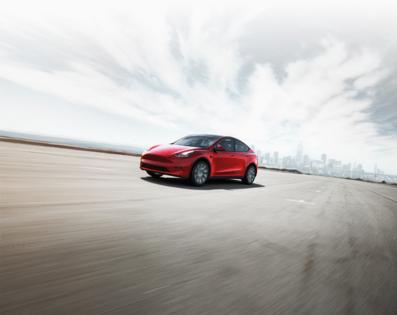 Reviewing a Tesla is a bit like hitting a moving target. Eschewing the traditional model year cycle, Tesla is constantly delivering software updates, battery pack tweaks and new sensor packages. At some point, we just need to take aim and loose the arrow, and so that's what we're doing here. This is a review of a 2021 Tesla Model Y as it was in November, about three months after we bought one. Yes, unlike most of the car reviews you read here and elsewhere on these great internets, we at Roadshow put down our hard-earned money to take this Model Y home and give it a true and proper test. We'll own it for a two-year lease, but after as many months, it's time for the first of what I imagine will be multiple reviews.

And, dear reader, I'm sorry to say, this first one will not be good. The Model Y is a phenomenal achievement in many ways, a great blend of range and practicality and even performance mixed with a suite of unique features that are as useful as they are distinct. But, as it stands, you absolutely should not buy one. Let me elaborate on the why.

The Tesla Model Y is Tesla's smaller crossover, a two-row, five-seat SUV that takes the basic formula set forth by the Model 3 and more or less stretches it vertically by a few inches. There's some more headroom, sure, but the most significant tweak is in the rear, where the skinny little trunk on the sedan has morphed into a cavernous hatch. The Model Y offers 76 cubic feet of storage with the rear seats folded down. Seats lowered, the Model Y presents a nice, flat floor with a generous storage cubby hidden beneath. Raised, there's good headroom for rear-seat passengers, thanks largely to the panoramic glass roof.

The bigger talking point is up front, where the stark interior is dominated by a single, 15-inch, landscape-oriented touch display. This was quite a conversation starter back when the Model 3 was unveiled. Today, it's less distinctive, but still a major talking point. Being the sole display means it's not only a speedometer and overall gauge cluster but also aggregates the entire infotainment experience, including climate controls and even things like mirror and steering wheel position. Frankly I'm surprised Tesla hasn't buried the seat and window controls in there, too.

Most of the time it's totally fine, and I actually don't mind the absence of a gauge cluster when it comes to looking over to see current speed. However, looking at the Autopilot status and navigation prompts means having to gaze well down toward the bottom of that display. That means taking your eyes a long way from the road. A simple gauge cluster or heads-up display would solve the issue, but none are available, a curious omission on a car costing this much.

How much? Well, that varies widely and seems to change every week, but I can tell you what we paid for this one, at least. The Tesla Model Y Long Range you see here cost us $67,490 including $1,200 in delivery fees. The most outrageous expense was the $10,000 premium for the supposed Full Self-Driving package, which honestly I don't think we'll ever see in our 24-month ownership experience. We also paid an extra $1,000 for the Deep Blue Metallic paint, $1,000 for the hidden tow hitch and another $1,000 for the white vegan interior.

White interior on an SUV? Yeah, frankly it's not a decision I would have made for my own car, but I'm curious to see how well it holds up to use and abuse. After three months, the driver's seat is already picking up a distinct blue hue from denim, while the rear seat is absorbing black dye from the seat cover I was using to protect the upholstery from my dog. Even without those issues, the fabric feels rubbery at best, and while all five seats are heated, not a one of them is ventilated. That, again, is a disappointment on a car this spendy.