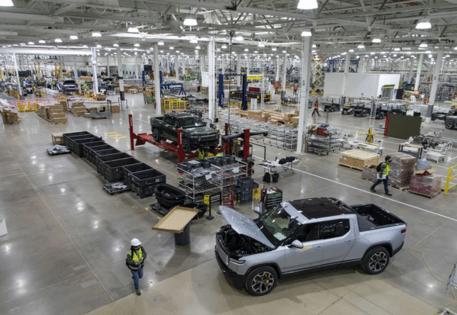 Startup electric truck manufacturer Rivian is seeking a valuation of about $60 billion in its forthcoming initial public offering, according to a filing Monday with the Securities and Exchange Commission.

Rivian is planning to offer 135 million shares of common stock priced between $57 and $62 per share. The company will have 994 million total shares outstanding after the IPO, which would value it at nearly $62 billion at the top end of the pricing range.

The stock is expected to begin trading on the Nasdaq under the ticker symbol RIVN this month, according to the SEC filing.

Rivian is building an electric truck and SUV, as well as 100,000 custom EV delivery vans for Amazon, an investor in the company. Rivian has raised about $10.5 billion from investors since 2019, a roster that also includes Ford Motor Co. and T. Rowe Price, which valued the EV manufacturer at $28 billion at the start of the year.

Amazon disclosed in an SEC filing last week it owned about a 20% equity stake in Rivian as of Sept. 30.

Rivian could raise more than $8 billion through its IPO, the most since Uber brought in $8.1 billion in 2019.

At $60 billion, Rivian’s valuation would rival both Ford, which has a $72 billion market cap, and General Motors, which is valued at $81 billion.

Rivian still has a long way to go to catch up with EV leader Tesla, which has a $1.2 trillion market cap as of Monday, after surpassing the $1 trillion valuation mark last week.

Rivian has generated significant buzz with its inaugural models, which feature 300-plus miles of range, go from zero to 60 mph in three seconds and start at $73,000 for the R1T truck and $75,500 for the R1S SUV, offset by a $7,500 federal tax credit for electric vehicles. The first trucks rolled off the line in September, while the SUV is expected to launch in December, according to the IPO filing.

As of Oct. 31, Rivian had received about 55,400 R1T and R1S preorders from customers who paid a refundable $1,000 deposit, according to Monday’s IPO filing. Rivian has reserved up to 7% of the IPO shares for U.S. customers who had standing preorders as of Sep. 30.

The $73,000 launch edition of the R1T is sold out, the company said. But the Adventure, which has similar features and is also priced at $73,000 before the federal rebate, and the Explore, a slightly more utilitarian model priced at $67,500, are due out in January.

Founded in 2009, Rivian has 3,136 employees working at its Illinois production facility, a converted Mitsubishi plant in Normal, Illinois, a college town about 130 miles south of Chicago. The company, which is headquartered in Irvine, California, has about 9,000 employees overall.

The Normal plant can produce up to 150,000 vehicles annually, with expansion plans enabling it to ramp up to 200,000 vehicles by 2023, according to the IPO filing.

As the most onerous federal mpg regulations in 50 years force the auto industry toward electric vehicles, domestic manufacturers are in the catbird seat. Credit the Detroit Three's huge advantage in profitable fleet trucks...Read More