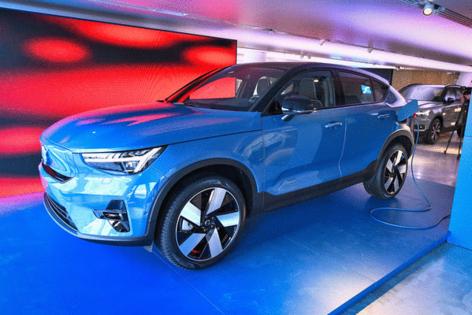 The 2022 Volvo C40 Recharge is full of firsts for the Swedish brand. It's Volvo's first car that's only available with a fully electric powertrain, with pretty much every upcoming model to follow suit. It's Volvo's first entry into the crossover-coupe market, and it's the first Volvo to only be available with a leather-free interior, like all future Volvo EVs will be. The C40 is also the company's first car that's only available to purchase online. Despite all of these firsts, the C40 Recharge just feels like, well, a regular Volvo — and a great one at that.

Driving impressions and technical data aren't what matters most with the C40. The coupeover is available with one powertrain configuration that uses a 78-kilowatt-hour battery pack and a pair of electric motors, one at each axle. The setup is identical to the XC40 Recharge, but with 408 horsepower and 487 pound-feet of torque the C40 is slightly more powerful than the XC40. Volvo quotes a 0-to-60-mph time of 4.5 seconds, a couple tenths quicker than the XC40. While the EPA hasn't officially rated the C40 yet Volvo estimates a range of 225 miles, also slightly better than the XC40's estimated 208 miles.

The C40 seems quieter on the highway than the XC40, likely helped by its better aerodynamics. The 20-inch wheels with a cool aero design and all-season tires will be standard in the US, and the C40 has nonadaptive dampers. Its ride is firm but smooth and comfortable, even on the cobblestone roads of Ghent, Belgium. There are no drive modes beyond Off-Road, though you can make the steering weight heavier and adjust the level of regenerative braking — I love the C40's true one-pedal capability. Overall, the C40 drives pretty much exactly the same as its XC40 sibling, and that's a good thing.

Now, the good stuff. Nearly every body panel is unique to the C40: Its front end is similar to that of the XC40, but the blocked-off grille is more sleekly integrated and the standard pixel LED headlights are more angular. The logo in the grille is heated so the camera and sensors within won't get grimy in lousy weather. The lower surfacing has a more horizontal line that's continued on at the rear bumper, but the bumper itself remains the same. Exclusive to the C40 is the new Fjord blue color that was inspired by, you guessed it, the waters of Sweden's fjords, which are a deeper blue color than the dark water of lakes or the greener ocean. The blue was chosen partially because it's currently on trend, but also because it's indicative of the C40's eco-conscious vibe.

All that said, the roofline is obviously the main event. It's one continuous curve from the base of the hood to the tail, and the side windows kick up at the C-pillar to line up with the roof spoiler. The C40 will only be offered with a black roof no matter the paint color, and I think it really works. The dual upper spoilers are stylish and functional, increasing aerodynamics and hiding the hinges, while the lower spoiler at the base of the window is purely functional, improving stability. My favorite design feature is the new taillights, which extend all the way up the hatch with segmented LEDs and have cool body color inserts on the tailgate.

The C40's cabin doesn't stray as far from the XC40, but it gets some unique touches. The car is launching with an all-black color scheme consisting of suede and Microtech upholstery. And while the C40's interior is completely leather-free, Volvo is careful not to call the interior vegan. (There are animal byproducts used in the interior's creation.) Similar to what's in the Polestar 2, the Microtech material feels durable and high-end, kind of like a wetsuit or fancy bag. Coming next year will be this same material combo in another color, two textile choices and even a stunning silver wool option, though I don't know which (if any) will come to the U.S.

Spicing up the black interior are the available Fjord blue carpets and felt door inserts, which are a no-cost option and an absolute must-have. A large, fixed panoramic roof is standard, and though it's UV tinted I still wish there was a sunshade. The front cabin gets cool 3D trim pieces on the dashboard and doors that have a geometric motif, and the plastic is illuminated from behind, a very cool effect when it comes on at night. The pattern is an actual section of topographical map from the Abisko National Park in Sweden.

Standard on the C40 is a 9-inch portrait touchscreen running Volvo's new Google-based infotainment system, which is a big upgrade over the old Sensus software. The C40 does have a few new features that will come to the XC40 via over-the-air update, like a new range optimization button that adjusts the climate control for better efficiency without completely turning it off. Volvo says that more apps are in the works, including more than just the media apps currently available.

Obviously the coupe-like roof cuts into the C40's cargo space compared to the XC40, but honestly not by much. The XC40's rear hatch is already pretty raked and the C40 still gets a three-way split bench seat that folds completely flat, though rear headroom is definitely tighter for those over 6 feet tall. There are a couple of storage cubbies underneath the cargo area floor, too. Rear visibility is quite a bit worse in the C40, mostly because of the much smaller rear window, and I wish the C40 had a rear wiper. But the styling to me is worth the practicality trade-off, especially when you get to the price.

The C40 starts at $59,845 including a $1,095 destination charge, and it only comes in one trim level and no options beyond metallic paint, which costs $695 (the only no-cost color is black). Otherwise the C40 comes fully loaded, including features that are optional on the XC40. The XC40 Recharge starts at $56,395, but add those options and it's only a few hundred bucks cheaper than the C40.

The C40 Recharge is available to reserve now with a refundable $500 deposit. No C40s will be stocked at dealerships as the car is only available to purchase online, a move that Volvo will use for future EVs as well. Volvo says this is achievable thanks to the C40's small options list, and while I don't have much info on the delivery process yet, it's said to be "quick."

The C40's styling and purchase process won't be for everyone, but for design-conscious and tech-forward folk that want a solid EV, this new Volvo is a great option — and it foreshadows a lot of what's to come from the brand's more mainstream offerings.

Editors' note: Travel costs related to this story were covered by the manufacturer, which is common in the auto industry. The judgments and opinions of Roadshow's staff are our own and we do not accept paid editorial content.