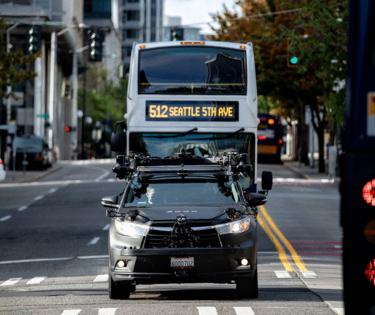 But an announcement last Monday from Amazon's self-driving car unit Zoox that it will soon start testing its autonomous vehicles in downtown Seattle drew criticism from transportation-safety advocates. The early promise of the technology, they said, has been overshadowed by a string of crashes and near-misses, due in part to lax oversight of the rapidly growing sector.

"A lot of people have bought into the hype of self-driving cars, that they'll cure the tradeoff between safety and speed," said former Seattle Mayor Mike McGinn, now the director of pedestrian advocacy group America Walks. "But safety requires moving slowly and stopping at signs of danger."

"That's been a challenge for self-driving vehicles to do in urban setting with pedestrians and bikes," McGinn continued.

In the coming months, Zoox plans to test-drive as many as four Toyota Highlander SUVs retrofitted with the company's autonomous-driving technology and sensors in Seattle's Belltown, South Lake Union and downtown neighborhoods, city Department of Transportation spokesperson Ethan Bergerson said. Human drivers will be in the cars to take over in the event of a possible collision, Zoox said in a news release Monday.

In an interview with Bloomberg, Zoox co-founder Jesse Levinson said the company had obtained all relevant regulatory approvals to test its cars in Seattle.

That required paperwork, though, amounts to a one-page self-certification filed with Washington state's Department of Licensing, in which Zoox lists its insurance information, checks a box noting that a human driver will be present and agrees that the driver will monitor the vehicle and take over "if assistance is required."

Amazon acquired Zoox in 2020. The autonomous vehicle company, headquartered in California's Bay Area, has said it aims to create a fleet of driverless taxis.

Self-driving cars have been hailed as a way to remove human drivers — by nature somewhat unpredictable, and occasionally impaired — from behind the steering wheel, reducing a major risk factor for traffic collisions.