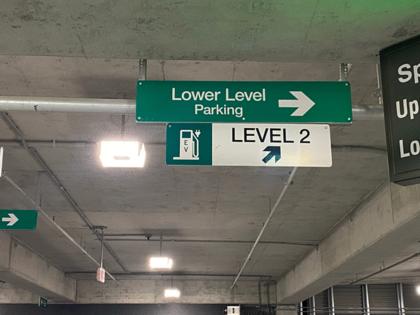 They're nearly always wrong, but it's not their fault: The electric vehicle charging industry does a miserable job letting people know where to find chargers.

"People are largely unaware of the existing EV charging infrastructure," said John Voelcker, a journalist and analyst specializing in electric vehicles. "There are literally tens of thousands of public charging stations now, soon to be hundreds of thousands."

Gas stations are impossible to miss. Every BP or Shell station has a lighted tower visible for miles, not to mention LED signs explaining prices for every fuel grade and how to pay. Plus amenities like brightly lit parking lots, restrooms and shopping plazas where you can get anything from a Coke and candy bar to souvenirs, elk jerky and a fresh, handmade sub. I'm not saying they're good, but you'll never go hungry on the interstate because you couldn't find one.

Compared to that, finding an EV charger is a sadistic scavenger hunt. They lurk inside parking structures, at apparently random spots in public lots, behind car dealerships, on the least trafficked side of Meijer and Whole Foods. Snag a soda or use an adjacent restroom? Dream on.

In one case near my house, a high-speed DC charger — the fastest, most desirable public charger — sits anonymously in what appears to be a Dunkin' employee parking lot. A rank of six chargers in a nearby parking structure is denoted by a sign that's not visible from the street: You can charge here, but don't tell anybody. It's a secret.

It's enough to make you think the charging companies work for Big Oil. They don't, but failure to promote their service is a significant obstacle to widespread adoption of EVs.

"Part of the problem is that EV owners have apps to locate nearby stations, but people who don't have an EV don't even know the apps exist, much less the chargers," said Chelsea Sexton, EV advocate and a consulting producer for the documentary "Revenge of the Electric Car."

EV owners generally do most of their daily charging overnight at home, when they'll pay a lower rate and there's no rush: A level 2 charger is fine when you charge through the night.