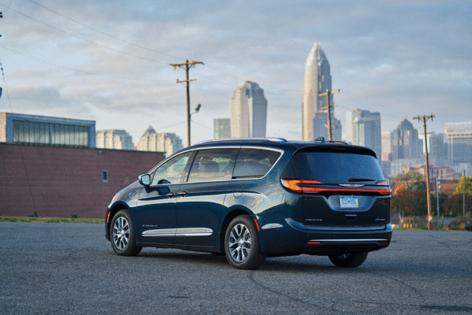 The maker of Jeep SUVs and Ram pickup trucks on Monday said it has entered into a memorandum of understanding with LG Energy Solution to create a joint venture for the production of electric-vehicle battery cells and modules in North America.

The joint venture between Stellantis NV and the Korean battery maker intends to break ground on a U.S. battery plant in the second quarter of 2022. A location is under review, and Stellantis declined to specify if it's in Michigan. The plant will have an annual production capacity of 40 gigawatt hours with the goal of starting production by the first quarter of 2024.

The partnership, which is subject to regulatory approval, is the next step for Stellantis, the merger between Fiat Chrysler Automobiles NV and French rival Groupe PSA, in its bid to compete in an electrified future. The company plans to invest $35.5 billion in electrification through 2025 and offer an all-electric option for each of its models in the United States by 2029. Stellantis believes it must produce batteries for plug-in hybrids and EVs to represent more than 40% of U.S. sales by 2030.

"Today's announcement is further proof that we are deploying our aggressive electrification road map and are following through on the commitments we made during our EV Day event in July," Stellantis CEO Carlos Tavares said in a statement. "Together, we will lead the industry with benchmark efficiencies and deliver electrified vehicles that ignite passion."

Stellantis during its EV Day said it plans to have 90 gigawatt hours of capacity contracted in North America by 2030. It expects to have two battery plants on the continent by then, with the second built with a major battery supplier or its European battery joint venture.

LG already is tied up with one other Detroit automaker: General Motors Co. Their joint venture, Ultium Cells LLC, is constructing battery plants in Lordstown, Ohio, and Spring Hill, Tennessee, which will open in the first quarter of 2022 and late 2023, respectively. The Lordstown plant will have 30 gigawatt hours of annual capacity. Two other plants, whose locations have yet to be announced, also are planned.

LG currently produces lithium-ion battery pack system and controls in Holland for Stellantis' Chrysler Pacifica Hybrid minivan, a relationship that dates to 2014. LG also produces batteries for GM's Chevrolet Bolt EV and EUV, which the Detroit automaker recalled in August after a manufacturing defect was found to create a fire risk while vehicles charged.

Chrysler hasn't recalled the Pacifica's high-voltage batteries. LG has said assembly lines are individually operated for different EV models and the manufacturing process for Chrysler modules is different from from the Bolt's. Samsung, meanwhile, is supplying the batteries for the new plug-in hybrid Jeep Wrangler and Grand Cherokee 4xe SUVs.

"Establishing a joint venture with Stellantis will be a monumental milestone in our long-standing partnership," said Jong-hyun Kim, CEO of LG Energy Solution, in a statement. "LGES will position itself as a provider of battery solutions to our prospective customers in the region by utilizing our collective, unique technical skills and mass-producing capabilities."

Ford Motor Co. has teamed with SK Innovation Co. to produce batteries in the United States. Two BlueOvalSK plants in Glendale, Kentucky, and one in Stanton, Tennessee, are expected to open starting in 2025 and will offer a combined 129 annual gigawatt hours of capacity for the Dearborn automaker.

In Europe, Stellantis has partnered with French oil and gas company TotalEnergies SE and Daimler AG's Mercedes-Benz for its Automotive Cells Co. joint venture. A total of three battery plants are planned in France by 2023, Germany by 2025 and Italy by 2030. Altogether, they represent 120 gigawatt hours in annual capacity.

"With this," Tavares said of the LG partnership, "we have now determined the next 'gigafactory' coming to the Stellantis portfolio to help us achieve a total minimum of 260 gigawatt hours of capacity by 2030."