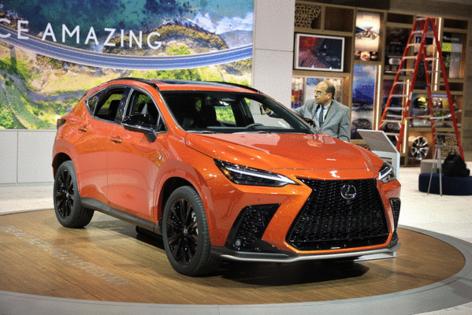 Just about every part of this compact luxury SUV that should've been improved, is.

Time can be harsh. Following its debut in late 2014, the Lexus NX compact crossover seemed well positioned for younger buyers looking for a way to sneak into the automaker's portfolio, but as the years dragged on, its competitive set pushed ahead while the NX floundered. The 2022 Lexus NX seeks to remedy that with a serious dose of 21st-century upgrades, and it's accomplished nearly everything it set out to.

Out with the old tech, in with the new

The single most important change in the 2022 Lexus NX is inside, where the automaker's tired old infotainment has been kicked to the curb in favor of something far better. The so-called Lexus Interface is the result of the company's North American arm finally putting on some pants and telling Japan that its old telematics were holding the automaker back with younger, more tech-enveloped buyers.

And guess what? Lexus nailed it. Standard on a 9.8-inch screen and optionally available in a larger 14-inch format, Interface looks and feels like it belongs in this century. Responsiveness is way up, thanks to a big boost in processing power. The design is clean and straightforward, lacking a home screen but sporting a permanent dock on the left side that makes it easy to swap between various menus. The full-screen navigation map might be my favorite part, although it could stand to have a little better contrast in the colors used for backgrounds and side roads. My fingers do all the work now; there are no trackpads to be seen.

The features run deep in Lexus Interface. In addition to usual trimmings like wireless Apple CarPlay and Android Auto, the system integrates Apple Music and Amazon Music into the head unit via the onboard 4G LTE modem. Natural-language voice recognition wakes up with the usual "Hey" command and will do anything from finding a coffee shop to turning on the windshield wipers. User profiles stored in the cloud allow you to hop between Interface-equipped vehicles and hold onto various settings. And, while a demo wasn't available, the NX will let you use your phone as a key and share a temporary key with several people at once.

A digital gauge cluster and optional head-up display round out the new screens, both of which are capable of displaying all the necessary information I could want. A new steering wheel allows for greater menu manipulation, and on my well-equipped NX 350 tester, the HUD will show what each directional button does as I rest on it with my thumb.

Safety tech also gets a boost. Every Lexus NX comes with the automaker's Safety System Plus 3.0, which includes all the usual good stuff like automatic emergency braking, lane-departure warning, automatic high beams, adaptive cruise control and road-sign recognition. But there are also some clever additions like the ability to detect oncoming vehicles during a left turn and apply the brakes to avoid a collision, as well as similar capabilities for right turns to avoid hitting pedestrians or cyclists.

Even something as simple as the door is not immune to a tech injection. A new electronic door latch means a simple button press opens each door from the inside or outside (mechanical redundancies are hidden away in the event of a dead battery). While that might seem unnecessary, it allows the doors to work with the car's safety systems to prevent an occupant from opening a door into an oncoming cyclist.

My only true tech gripe is the wireless device charger. While I appreciate its large size, which should cover a vast majority of ever-embiggening phones, the surface is too slick, allowing phones to slip and slide and stop charging around curves. Even my leather iPhone ($378 at Amazon) case isn't enough to maintain a constant connection. Thankfully, there are four USB ports to use instead.