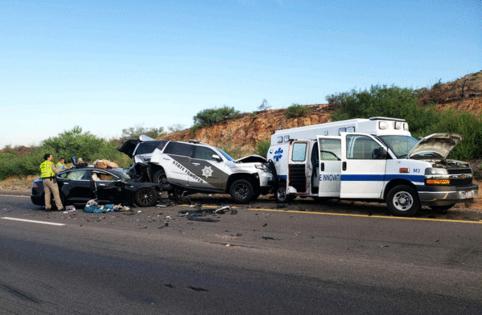 On a rainy winter night in December 2019, college student Maria Smith found herself followed by a state trooper, police lights flashing, on Massachusetts' Route 24. She pulled over to the side of the road. Then: Smack! Something had hit her car from behind, shattering her rear window. "I was scared," she said.

A Tesla running in Autopilot mode had slammed into the state trooper's cruiser, knocking it into Smith's car.

No one was injured in that crash, but it's part of a sweeping investigation launched in August by the National Highway Traffic Safety Administration. NHTSA is looking into a dozen similar episodes over three years in which Tesla vehicles traveling at a range of speeds ran into stationary police cars, firetrucks, ambulances and other emergency vehicles, injuring 17 people and killing one.

Announcing the probe, NHTSA noted that all of the Tesla vehicles involved were running on either Autopilot or Traffic Aware Cruise Control, software systems that allow the driver to relinquish control of speed and sometimes steering while — in theory, at least — staying ready to intervene. NHTSA said it would be looking into such factors as how the vehicle makes sure drivers are paying attention and how it detects visual cues of a crash scene such as flashing lights and flares — details that an alert human driver would be unlikely to miss.

But its investigators will also be digging into a question involving a more basic technology: Why isn't Tesla's forward collision avoidance system better at preventing crashes like Smith's — at least when the computer is driving?

Compared with so-called advanced driver assistance systems such as Autopilot, a forward collision avoidance system is relatively crude. It is designed to answer one question — is a frontal impact imminent? — and respond to danger by sounding a warning and, if necessary, triggering a subsystem called automatic emergency braking. Unlike Autopilot, which must be selected manually and is available only under some driving conditions, automatic emergency braking runs by default unless manually turned off.

First developed in the mid-1990s, automatic emergency braking is effective at preventing or reducing the severity of crashes, said David Aylor, manager of active safety testing for the Insurance Institute for Highway Safety. IIHS has found that automatic braking systems can reduce the incidence of front-to-rear crashes by 50%, with better performance at lower speeds and in good visibility conditions.

"We think it's a great technology and all cars should have it," Aylor said.

"The benefits are pretty astounding," said Kelly Funkhouser, head of connected and automated vehicles for Consumer Reports. "It's the one technology I would never let a family member or friend buy a car without."

Tesla calls its vehicles "the safest cars in the world," citing their combination of structural engineering and advanced technology. But when it comes to the forward collision avoidance system, Tesla owners have been reporting problems at a substantially elevated rate compared with similarly equipped cars.