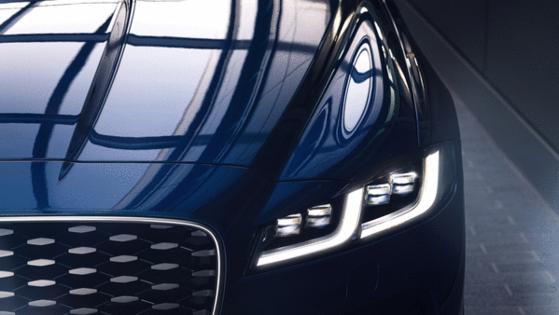 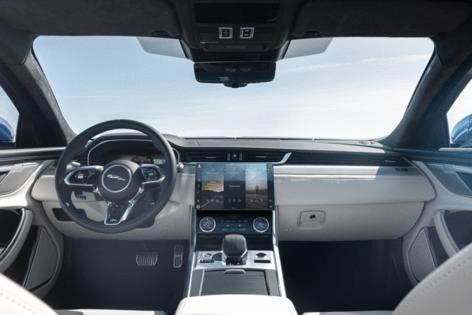 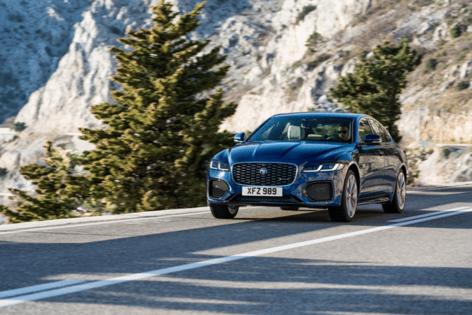 No matter how much money you have — or don’t have — everyone loves a bargain. So what if I said you can buy a new 2021 Jaguar sedan at a price that’s $7,105 lower than last year, yet it has a dramatically improved interior, updated infotainment system and styling updates? You’d say, tell me more.

OK, I will. For 2021, Jaguar has cut the price of the Jaguar XF to $43,995. For that, you get a 246-horsepower turbocharged 2.0-liter four-cylinder engine, an eight-speed automatic transmission and rear-wheel drive.

Now consider its German competition, all of which boast a turbocharged four and automatic transmission and cost considerably more. You could choose the 248-horsepower BMW 530i, which starts at $54,200, or the 255-horsepower Mercedes-Benz E 350, base price $54,950, both of which are rear-wheel drive like the Jaguar XF. There’s also the 261-horsepower Audi A6 45 Premium, base price $55,400, with all-wheel drive.

Have I tempted you yet? Now it’s time for the fine print.

The Jaguar XF is now the brand’s only sedan after last year’s discontinuation of the Jaguar XE sedan. But one gets the sense that the company is redefining the Jaguar XF, as it no longer has the rip-snorting V-6 or V-8 power of its competitors. At the same time, the XF has been treated to a new interior design, one that emphasizes a sleek contemporary opulence over sporty aesthetics — even as its athleticism remains intact. It has become more a luxurious GT than sports sedan. Not that there’s anything wrong with that. After all, few of us spend our days commuting on the Autobahn.

And besides, the XF’s powerplants provide more than enough authority to keep things interesting. Base P250’s and mid-level P250 SE’s turbocharged 2.0-liter four-cylinder engine generates a respectable 246-horsepower with rear-wheel drive. P300 trims get a more powerful version of the same powerplant producing 296 horsepower and all-wheel drive, with enough gusto to keep things lively. The XF’s power is more than enough for its segment market, and more than up to the task of moving this machine with the requisite passion, but without the effortless well of torque you might expect. The transmission is well-behaved, making the most of the available muscle.

And unlike German sports sedans and their blindly inferior impersonators, the Jaguar XF comfortably soaks up the worst road irregularities. It’s fairly agile, with little body lean in corners and a quiet cabin. After all, this is a British saloon. It keeps a stiff upper lip and carries on, all with enough comfort to prevent you from spilling your cup of Darjeeling. The seats are comfortably well bolstered and not punishingly stiff, making them the perfect thrones for long drives. Head and leg room are generous up front, and merely adequate in the rear, which is typical in this class. Trunk space is minimal at 10.5 cubic feet, so pack lightly.

Adding to this cat’s quiet, capable moves is an exquisitely redesigned interior, decorated in the finest contemporary British fashion. After a period if steering away from the wood-accented interiors it was known for, Jaguar is once more returning to them, but opting for open-pore wood rather than the glossy finishes that most people assumed were fake. It adds authenticity to the cabin that elevates its allure, as do other divine details, such as the cricket ball stitching in the shifter, or the diamond Jaguar logo shapes on its knurled drive mode selector.

The instrument panel redesign features an 11.4-inch Pivi Pro infotainment screen with a user interface that puts most of what you need within one or two clicks. And its editorial-like layout makes it far easier to use than previous Jaguar systems. Even better, the accompanying Meridian sound system is exemplary, transforming the XF into your private concert hall. My home stereo should be so good.

All the little details create the impression of a car far more expensive than it is. True luxury is rarified, and it's something Jaguar does better than most of its competition, who to be more concerned with mass production than class production.

The 2021 Jaguar XF is something special, a unique flavor in a segment overwhelmed by mass-produced German luxury sedans. How can you tell your Bimmer, Merc or Audi apart from your neighbor’s?

The Jaguar isn’t produced in the same numbers. It’s a sedan worth savoring, something distinctive that now costs less. And that makes it well worth considering, if you’re smart enough to realize why.