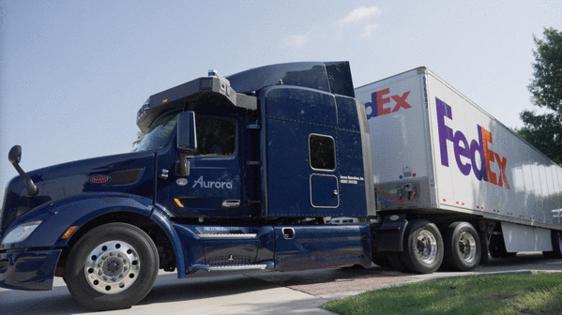 Aurora Innovation, a California-based self-driving technology company, this week begins testing autonomous trucks made by Washington-based Paccar, hauling FedEx loads between Dallas and Houston. The pilot marks the next phase of a partnership between the three companies that was announced in January.

"There's nothing that will be more transformational" to the trucking industry's economics than the possibility of removing drivers, said Paccar chief technology officer John Rich.

The fleet of a dozen trucks, owned by Aurora, will be used for "several trips per week" on the 500-mile round-trip route while hauling real, revenue-earning loads, an Aurora spokesperson said. The company has outfitted the Paccar-built trucks with its driverless technology, which includes sensors, cameras, radars and additional software.

Rich said Paccar has a dedicated team working with Aurora and has designed the Peterbilt 579s with additional software capabilities that Paccar vehicles normally don't have, allowing them to be controlled by a computer. The trucks also include backups for critical systems like steering, braking and power supply that kick in if the driverless technology ever fails.

"None of this stuff can really be an afterthought add-on to a truck," he said. "It's got to be integrated from the start and developed in parallel."

The trucks being used in the pilot project will have a human safety driver behind the steering wheel.

He said long-distance trucks are a more likely application for driverless technology than passenger cars, because freeways are a more manageable challenges than busy cities that present "unconstrained" problems.

The news of the testing program follows lackluster earnings for FedEx, which this week posted a 7% decline in quarterly profit attributed in part to labor shortages. Autonomous trucking has been touted as a way to depend less on drivers, with the potential to reduce transportation companies' costs. At the same time, it threatens to displace millions of workers who drive for a living.

Rebecca Yeung, vice president of innovation and advanced technology at FedEx, said the company is less interested in applying autonomous trucking to routes that are currently operated by its own drivers and more interested in using it for routes that are currently outsourced to third parties. For example, FedEx outsources routes to third parties when it can't keep up with shipment volumes during surges in business.

"Our driver is our biggest asset," said Yeung, asserting that drivers and autonomous technology are "complementary in nature, not conflicting in nature."

Drivers also do more than just drive, said Raj Venkatesan, a professor at University of Virginia's Darden School of Business. They are also responsible for supervising the loading and unloading of freight, keeping track of inventory and bookkeeping.

Still, Venkatesan said, cost savings are likely. Companies will have access to more data about their fleets, including vehicle usage, traffic patterns and energy consumption.

"All of that allows you to better manage your resources and also better deploy resources," he said.

Rich said he thinks displacement of trucking jobs is likely to occur, but it is also likely to "increase quality of life for a lot of drivers," given how difficult trucking jobs are.

"These jobs are hard because they're away from families, and they're fairly disruptive to your life if you go on the road for six weeks," he said. "... It's just not a popular job for younger generations in American society."

In this age of rapid technological change, we crave analog experiences. We enjoy unplugged instrumental music. Or cozying up with a page-turning novel rather than a digital Kindle. In the auto world, the normally aspirated...Read More