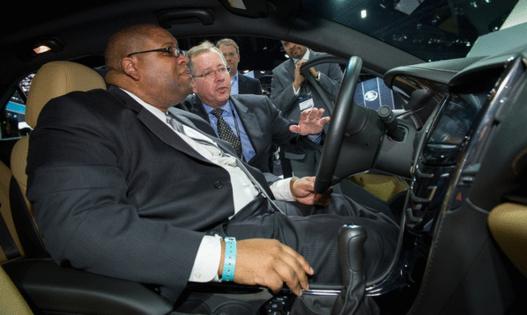 Strickland is currently the staff director of the U.S. Senate Committee on Commerce, Science and Transportation (Senate Commerce). He served as administrator of NHTSA during the Obama administration, from 2010 to 2014.

"David has an extensive background working on a wide variety of transportation and auto industry policy issues," Vargas said in a statement. "His knowledge of the issues and ability to work collaboratively with government and industry make him the perfect leader to help drive regulatory policies in support of GM's growth initiatives, including our vision for an all-electric and autonomous future."

GM has said it will bring 30 new EVs to market by mid-decade with a vision to offer an all-electric light-duty lineup of vehicles by 2035.

Strickland replaces Bob Babik, who will retire Jan. 1 after 20 years with the automaker.

Strickland, who has worked in the government affairs and regulatory area for 25 years, will lead GM's team that works with regulatory agencies at the local, state, national and international levels, GM said.

Strickland began working directly on transportation and auto industry issues in 2001 when he first joined Senate Commerce as senior counsel for the Consumer Protection subcommittee, GM said in a bio.

In 2009, President Barack Obama nominated Strickland as NHTSA administrator and the U.S. Senate confirmed him to the role. In 2014, Strickland left NHTSA to work at the Washington, D.C., law firm Venable LLP as a partner in the firm's privacy and data security practice. He focused on connected and automated vehicle policy.

In 2019, Strickland returned to Senate Commerce where he has served as staff director for Chair Maria Cantwell, D-Washington.

Strickland holds a bachelor of science degree from Northwestern University and a juris doctor degree from Harvard Law School.

The maker of Jeep SUVs and Ram pickup trucks on Friday announced plans for a second joint venture to build a second battery plant in North America — this time with Samsung SDI.