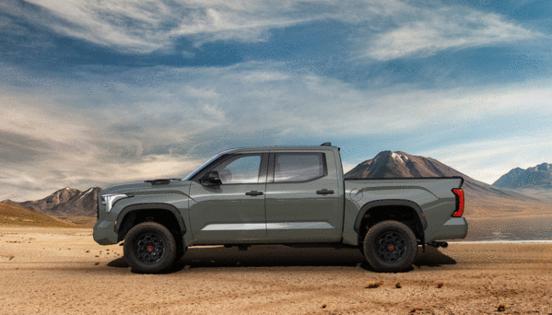 Success in the full-size pickup market has been elusive for Toyota thus far, but the automaker brings its A-game to the fray with its 2022 Tundra, a brawny new truck that has the Ford F-150, Chevy Silverado and Ram 1500 in its sights.

The top Tundra model will be the first pickup to get Toyota's legendary hybrid technology to boost fuel economy and performance. The '22 Tundra, new from the ground up and going on sale in late 2021, will also have a 12,000-pound towing capacity and an independent rear suspension like the Ram 1500.

The Detroit Three's pickups are moving targets, though. Ford already is in blitz mode promoting the electric F-150 coming next spring. News of a matching electric Silverado and GMC Sierra is expected soon. Gasoline-powered pickups will remain the vast majority of sales for at least the rest of this decade, but Toyota remains less enthusiastic about electric vehicles than Ford and GM.

The Tundra's upgrades are meaningful, though, bringing new capability, convenience and comfort.

"Our design goal from the beginning was to create the most powerful, rugged and sophisticated looking full-size pickup that will take Tundra to a whole new level," said Kevin Hunter, president of Toyota's U.S. design group. "Because recreation and an outdoor lifestyle are at the core of Toyota truck identity, we set out to create a muscular, chiseled and athletic design that also looks like it could handle the toughest towing demands."

Prices, fuel economy and other information will be announced closer to sales. The 2021 Tundra prices started at $35,365. The 2022 should begin within a few hundred dollars of that.

The new Tundra will offer a pair of four-door cabs and 5.5-, 6.5- and 8.1-foot beds. It has a fully-boxed high-strength steel frame and an aluminum-reinforced composite bed. Toyota engineers widened the frame at the rear to improve ride and towing stability. The frame also has more and bigger cross members for greater stiffness

Toyota says the sheet-molded composite (SMC) bed is lighter and more resistant to dents than metal.

The front suspension gets a double-wishbone layout.

Toyota built its pickup reputation on the off-road performance of its smaller Tacoma pickup, and the Tundra offers plenty of off-road goodies, including monotube Bilstein shocks.

The top TRD Pro model raises the ante with 2.5-inch Fox off-road racing shocks, which also lead to a 1.1-inch increase in front lift. An electronic system that manages brakes, throttle and traction — freeing the driver of all obligations but steering — is available.

An optional air suspension has self-leveling capability and three heights — normal, high for off-road, and low for easy loading. The suspension automatically returns to normal height when it reaches programmed speeds: 18 mph in the high, off-road, and 8 mph when it starts moving after using low to load cargo.

The Tundra ditches the previous models' choice of normally aspirated V6 or V8 in favor of two twin-turbo 3.5L V6s, one electrically augmented by a hybrid system.

Adding a hybrid's electric motor raises the 2022 Tundra's power to 437 horsepower and 583 pound-feet of torque.

The Tundra is the first vehicle Toyota is giving an internally developed infotainment system.

Using an 8- or 14-inch touchscreen, the system responds to smartphone-like motions like pinching to zoom. There's also a dial for volume, but none for tuning. Temperature and fan speed are controlled by toggles.

Toyota's new virtual assistant responds to wake-up commands including "Hey/Hi/Hello/OK Toyota." Those choices seem to invite false positives, something I'll check for when I evaluate a Tundra in a few weeks.

The navigation system uses cloud-based data for locations and points of interest. Toyota says the system will detect approaching areas of low connectivity and caches directions before it loses access to the cloud.

User profiles for climate control and audio also are saved in the cloud.

Standard safety systems include pre-collision alerts with pedestrian and cyclist detection, and oncoming pedestrian and vehicle alerts when making a left turn at an intersection. The system also stabilizes the driver's steering input while avoiding a pedestrian, cyclist or vehicle.

In this age of rapid technological change, we crave analog experiences. We enjoy unplugged instrumental music. Or cozying up with a page-turning novel rather than a digital Kindle. In the auto world, the normally aspirated...Read More