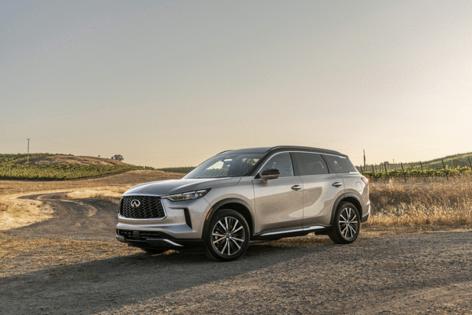 Long overdue for an update, the 2022 QX60 marks the first major redesign for Infiniti's luxury three-row SUV since it debuted as the JX35 back in 2012. The new QX60 is a handsome reimagining of its predecessor's design matched with a total overhaul of the interior. New tech and more standard safety and convenience features round out the second-generation changes, making for an all-around better SUV.

The 2022 QX60's exterior keeps the broad strokes and proportions of the previous model intact, but massages the details for a more modern and streamlined look. I particularly like the new hidden D pillars and horizontal chrome accents, which create a profile that's much cleaner than before. Combined with the available two-tone colorway's black roof, the new QX60 looks leaner, longer and lower -- all good things.

The new QX60 is about 2 inches shorter than before, measuring 198.2 inches from bumper to bumper; the wheelbase is unchanged at 114.2 inches. Yet somehow, Infiniti has managed to free up more room for cargo and third-row seating. With all of the seats upright, the QX60 boasts a 14.5-cubic-foot rear hold, 5.8 cubes larger than last year. Start folding the third and second rows to see that space expand first to 41.6 cubic feet and then 75.4 cubic feet overall.

The front seats are Infiniti's (and Nissan's) Zero-Gravity buckets, designed to reduce discomfort due to pressure during long drives. They're pretty darn cozy and now come standard with leather upholstery. The Autograph trim level upgrades further to semi-aniline leather and adds a massage function for both the driver and front passenger. It's not the best massage I've ever had in a car, but I reckon it's good enough. My top spec also steps up to second-row captain's chairs with a handy center console that's removable for easier cleaning or improved access to the third row.

Overall, the QX60's new interior looks fantastic, with a stitched and quilted tan leather inspired by ripples on a still pond -- the pattern gets tighter as you move down the seat. Matte-finish wood on the dashboard contrasts nicely with horizontal piano black vents and satin metal accents. The QX60's cabin once again looks like a proper luxury car, which goes a long way to justifying its premium price.

The QX60's engine bay is home to Infiniti's 3.5-liter naturally aspirated V6. It's good for 295 horsepower and 270 pound-feet of torque, which is a pretty good amount of oomph for a vehicle of this size. The standard nine-speed automatic transmission can be a touch hesitant to kick down under acceleration, but put your foot into the throttle -- or grab one of the standard paddle shifters -- and the SUV can be coaxed into providing confident passing power.

Front-wheel drive is standard, but my QX60 features the optional all-wheel drive upgrade. Fuel economy for AWD models is estimated at 20 city mpg, 25 mpg highway and 22 mpg combined, but stick with front-wheel drive to bump up those figures by 1 mpg across the board. Numbers like those won't knock your socks off, but they're a smidge better than what the previous QX60 could muster, and at least on par with this SUV's competitors.

Drive modes give owners some control over the QX60's performance. There's Normal, Eco and Sport modes, each with tweaks to the transmission shift programming and throttle response. In practice, they don't really feel that much different from one another.

The new QX60's steering has a nice weight and the ride is firm and planted, yet somehow both lack any real communication or connection with the road. It's as if Infiniti was trying to create the sport-tuned feeling but neglected to include any of the actual sport tuning. This is fine -- it's not like the QX60 is a sports car or should even be evaluated as such -- but it is an odd side of the performance line to toe.

To Infiniti's credit, the QX60 never feels too harsh and strikes a decent balance of compliance over bumps and controlled body movement around bends. Road and wind noise are also nicely managed. I think the QX60 could benefit from the addition of an adaptive suspension to its list of options, but I also think just as strong a case could be made that most shoppers at this price will come away perfectly happy with the SUV's taut road feel.

General Motors predicts a challenging third quarter and warned Wall Street on Friday that its vehicle sales and production volumes would take a bigger-than-expected hit in the second half.

Sized between the quirky C-HR and mega-selling RAV4, the Cross...Read More

My friend Greg Lewis used to say in high school: "He's so dumb, he couldn't pour pee out of a boot if the instructions were written on the heel."

Courtesy of a recent five-day DTE power outage, I think I know what that ...Read More

Image and popularity remain a powerful force when selling anything: music, clothing or even choosing what to drive. It’s why some long-hallowed brands bite the dust after decades of popularity. It’s not that they ...Read More

SANTA CRUZ, Calif. — And now for something completely different.

The segment-busting 2022 Hyundai Santa Cruz pickup is the first of its kind — a unibody-based, head-turning Swiss Army knife with many tools for many ...Read More