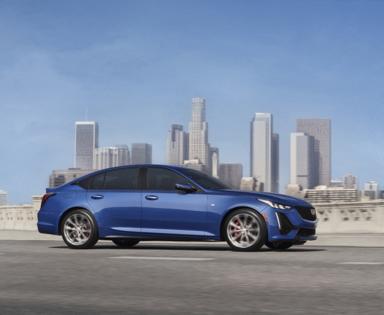 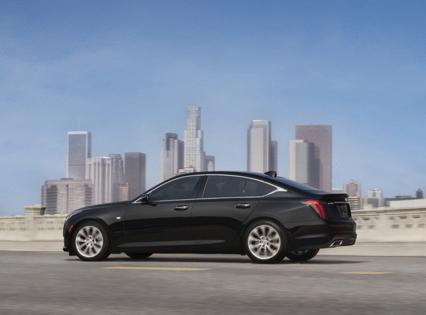 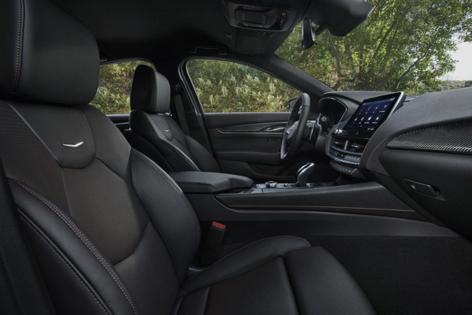 Cadillac has set itself on a bold course to go all-electric by the end of this decade. Call it the Yankee battle strategy as Cadillac follows California's Tesla — the only U.S. automaker to best the German juggernaut of Mercedes/BMW/Audi on the luxury front.

But it's not for lack of trying.

The 2021 Cadillac CT5 Premium Luxury sedan in my driveway is a gem. Pulling onto Telegraph Road in Pontiac, I toggled Drive Mode to SPORT and stomped the throttle with my size 15s. The 10-speed automatic transmission didn't miss a beat, launching the 335-horse, twin-turbo V-6 through the gears with millisecond-quick shifts.

It's one of the smoothest drivetrains in luxury autodom, and its surge of torque encouraged more misbehaving as I headed west and the lake-country roads became more twisted. Caddy essentially rebadged the last-generation CTS midsize sedan, then dropped it a segment to take on the compact Bimmer 3-series and Audi A6. So this is a big compact car — but the AWD system grips the road, transferring 405 pound feet of torque to the road without drama.

The buttery drivetrain is electric-like, but with more personality. The twin-turbo V-6 barked as it threw off shifts like machine-gun shells. Hard into a right-hander and the transmission rev-matched on downshift, the exhaust exhaling — HNUGGH! HNUGGH! It never gets old.

The CT5's V-6 is a reminder of the badge's huge performance bandwidth, which extends from the base twin-turbo inline-4, to the V-series I tested last year (with a healthy bump to 360 ponies) and the beastly 668-horsepower, V-8-powered CT5-V Black Wing (release the Kraken!). When you have the need for speed ...

Otherwise, the CT5 is a sharp gentleman in a black suit. Once overly masculine with a full-fascia grille and blocky corners, Cadillac's Art and Science design has matured. Its elegance is an interesting contrast to BMW's recent evolution to a macho full-fascia front grille. CT-5 proportions are classic: long hood, wheels pushed to the front corners, coupe-like roof draped over big rear haunches.

The doors open with a squeeze of rubber pads on the inside of fixed handles — a properly firm handshake welcoming you to the club — and you are inside the roomiest cabin in class. With a basketballer's 6'5" frame, I fit more easily in this car — with front and rear legroom to spare — than in its European competitors.

A comparably equipped AWD BMW M340i will run you eight grand more. For the extra dough, Bimmer gives you more sophisticated all-digital instrumentation and dash design. But functionally, the 3-series and CT5 are similar. Their roomy consoles are anchored by monostable shifters and remote infotainment screen controls (the screen responds to touch as well, which is my preference). Goodies like head-up display and the V-series configurable drive modes are available.

The folks at Dodge must know what their customers like.

The Stellantis brand that makes its living off heavy horsepower Hemis led all mass market brands and tied with Porsche overall in the J.D. Power 2021 U.S. Automotive...Read More

Rivian Automotive Inc. beat the Detroit Three to market with its all-electric pickup truck the R1T, which started rolling off the assembly line Tuesday, according to CEO RJ Scaringe's Twitter feed.

"After months of ...Read More

WASHINGTON — Executives at Toyota Motor Corp. are urging members of Congress to reject a proposal that would expand tax credits for electric vehicles up to $12,500 and offer significant incentives to buy union-made cars....Read More

On a trip to visit Disneyland with his children, John Jimenez of San Jose, Calif., reserved a compact car from Dollar Rent a Car at Los Angeles International Airport. What he got when he landed was a headache.

WASHINGTON — Democrats in Washington want to include a significant new incentive to buy electric vehicles in their $3.5 trillion social spending bill, according to a new plan revealed Friday by the House Ways and Means ...Read More

Long overdue for an update, the 2022 QX60 marks the first major redesign for Infiniti's luxury three-row SUV since it debuted as the JX35 back in 2012. The new QX60 is a handsome reimagining of its predecessor's design ...Read More