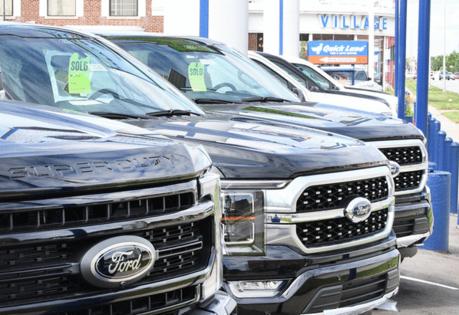 Ford Motor Co. reported better-than-expected second-quarter financial results and improved its outlook for the full year, even as it continues to battle supply-chain constraints that have caused delays in delivering hotly-anticipated new vehicles such as the Bronco.

Despite being hit hard by a months-long global shortage of computer chips, the Dearborn automaker posted $561 million in net income, or profits, in the second quarter, results it attributed to strong consumer demand, rising prices and improvements it's been making to the business.

"What we're seeing is the underlying strength in the business," said Chief Financial Officer John Lawler. "The demand for our vehicles, it's strong. We're getting great response for our customers. That's allowing us to manage through the situation."

The company reported second-quarter revenue of $26.8 billion, for a profit margin of 2.1%. Adjusted earnings before income and taxes — another closely-watched financial measure — came in at $1.1 billion for the quarter, for an adjusted EBIT margin of 4%.

And despite some expected headwinds later in the year, Ford raised its financial outlook for the year by about $3.5 billion. The company now expects full-year adjusted EBIT of between $9 billion and $10 billion.

Ford's stock was trading up about 3.7% in after-hours trading following the release. It closed the day at $13.86 per share.

The results came as a welcome surprise to Wall Street.

In a research note, Garrett Nelson, senior equity analyst at CFRA Research, said that Ford's improved outlook for the full year was "a big positive surprise given investor sentiment that Ford has and will remain one of the hardest hit from the semiconductor shortages."

"We reiterate our buy opinion on Ford," he said, "as the company has arguably the most positive momentum surrounding its new vehicle portfolio of any automaker and we are bullish on its operational turnaround under the leadership of CEO Jim Farley."

Ford Motor Co. is partnering with and investing $50 million into a battery recycling startup led by a Tesla co-founder as the Dearborn automaker works to shore up its battery supply chain for a forthcoming wave of electric...Read More