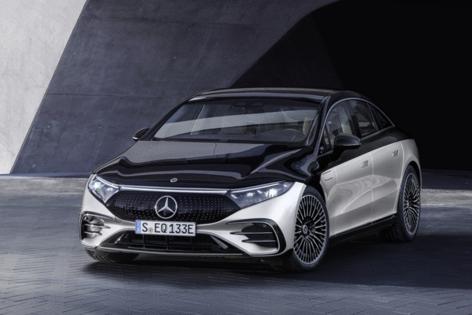 Tesla. There. I said it. Now I don't have to anymore. Because in all honesty, the car most people will compare to the 2022 Mercedes EQS isn't really in the same segment. Neither is the latest generation of internal-combustion S-Class, even though the two share more than a few technological innovations. The forthcoming EQS is its own thing: a fully baked, wholly impressive luxury car that sets a new high-water mark for high-dollar electric vehicles.

Don't let pictures of the Mercedes EQS set your opinion of its aesthetic. Form doesn't really take a back seat to function here; the two are more like seatmates. Will the EQS' pod-ish, single-line silhouette sit perfectly with everyone? No, but the benefits are undeniable. With specific 19-inch wheels and Sport mode activated, the EQS achieves an impressive drag coefficient of 0.20, making it the slipperiest production car yet. Not only does that mean a more efficient vehicle, it means wind noise all but disappears in nearly every situation.

In person, the EQS is pretty slick. The headlights and "grille" -- which is really a panel that hides several components of its driver-assist systems -- blend well, aided by a long LED running light that practically spans the front end's width. The EQS' best angle is straight-on from the rear, where it looks like a spaceship.

The long, unbroken line from the roof means the trunk is actually a high-hinged hatchback, offering simple access to a sizable cargo area that, according to Mercedes-Benz, eliminates the need for a frunk. The owner actually cannot open the clamshell hood at all, but I agree that the rear end has all the volume any owner will need. There's a port on the side for adding windshield wiper fluid, because EVs still need some traditional TLC. When it's time to charge, look to the passenger-side rear fender.

Approach the car, let the door open for you (yep, it's an option) and you meet the real star of the show: Hyperscreen. This dashboard (optional on EQS450 Plus and standard on EQS580) looks like one giant screen, but it's actually three separate displays integrated into a single pane of glass. The 12.3-inch driver display is probably the most common part, taking the role of the gauge cluster and offering multiple skins and bits of information, whether it's a radio station or a small map. In front of the passenger is another 12.3-incher that gives shotgun access to everything the MBUX infotainment system can do. If the seat is empty, it'll display a screen saver, and if the dashboard's eye-tracking camera catches the driver sneaking a peek, it'll dim the display to avoid distraction.

The real centerpiece is, uh, front and center. This 17.7-inch display can run the typical Apple CarPlay or Android Auto mirroring, but it's at its best in its natural state, displaying a positively massive map with several small overlays that let me access functions I use the most, whether it's music controls, the optional powered doors or the seat massagers. At the bottom is a permanent dock that houses the climate controls and a convenient home button.

MBUX is as sharp as ever, picking up on an owner's habits and reflecting that in its operation. It can make suggestions based on a person's daily routines, and the "Hey, Mercedes" voice assistant is happy to take my poorly phrased requests and turn them into proper commands. Several streaming services are available as base-level applications, too, eliminating one popular use for smartphone mirroring.

Everybody will be blown away by the screen, but don't sleep on the rest of the EQS' interior. Both trim levels are filled with soft leather. A blue dashboard topper provides a nice contrast against the white leather that covers the seats, armrest and every important touch point. A few dashes of wood trim complete the look. The lack of internal-combustion mechanicals means the center console now features a huge storage cubby under the cup holders, and I really appreciate the elastic strap that prevents whatever you put down there from sliding all over the place. Each headrest rocks one seriously cushy pillow, too. Charging is done through either the manifold USB-C ports scattered about, and front-seat occupants have not one, but two wireless chargers at their disposal.

If Hyperscreen isn't enough of a gee-whiz feature, perhaps the augmented-reality head-up display will do it. This is one of my favorite parts of the car, although it's shared with the new S-Class. The EQS uses an eye-tracking camera to display upcoming turns with arrows that grow larger in my field of vision as the turn approaches, making it awfully hard to miss. It also works with the adaptive cruise control, adding a green line under vehicles to show that the system is taking traffic into account. It's clever stuff.

While the EQS' interior is positively sumptuous and fancier than any other full-size four- or five-door, it's not 100% perfect. In traditional German fashion, the cup holders are a complete afterthought, popping out from a hidden position in the same style as the eighth-generation Volkswagen Golf and unable to carry anything larger than a convenience store water bottle. The door card pockets aren't that big, either, so workout addicts will have to find alternate accommodations for their Nalgene, although I'm not sure where that'd be. Rearward visibility is also ... not ideal, with the rearview mirror showing more interior than road.

It's hard to focus on any problem while out and about in the EQS, though, because it's just so comfortable. The car's suspension is tuned so sumptuously that it borders on being floaty, eating up nearly every hump or bump the road has in store. Both the EQS450 Plus and the EQS580 are clearly tuned for outright comfort. Even when I slap the adjustable air suspension to its sportier mode, isolation remains a high priority. It will tackle switchbacks in the sharper Dynamic mode with ease, thanks in part to 10-degree rear-axle steering that will be standard on both variants in the US. But it's clear to me that the EQS prefers its roads smooth and straight. Save the athletics for any upcoming AMG variants.

Most people would consider both EQS variants to be speed demons. The EQS450 Plus sends 329 horsepower and 419 pound-feet of torque to the rear wheels, which is enough for a 5.5-second sprint to 60 mph, although it feels quicker than that thanks to its immediate response. The EQS580 has four driven wheels and boosts output to 516 hp and 631 lb-ft. With a 4.1-second 0-to-60-mph time, this one has a bit more of the "Holy crap!" visceral response that comes with modern EVs. At low speeds, you get the traditional futuristic noises that accompany all EVs, although the EQS's unique soundtrack may or may not sound a bit like Hans Zimmer's "Interstellar" score.

There's one part of the EQS' driving experience that deserves its own breakout, and that's the regenerative braking. There are three traditional levels of intervention -- strong, normal and none -- with an additional "smart" mode that adjusts the regen based on factors like traffic and road topography, and it also enables one-pedal driving in urban environments. Each mode has its time and place, but what's interesting is that when the regen engages, the brake pedal moves. This is unlike any other EV in existence, and an engineer said this was a deliberate decision to make the brakes feel more natural and remove any "dead" zone at the top of the pedal throw. It takes some getting used to, and I'm not sure if I really like this feature yet, since in spirited driving it means the brake pedal isn't always where your foot expects it to be.

Both EQS variants have an estimated range of 780 kilometers (about 485 miles) by European WLTP standards, which is some mega range, and multi-hour stints behind the wheel moved the "fuel gauge" so minimally that I'm inclined to believe it. That said, the EPA hasn't yet settled on a U.S.-specific range, so we have to wait a little longer before we get a better idea of how it will fare stateside.

Part of the reason for that big range is, surprise surprise, a big battery -- 107.8 kilowatt-hours, to be specific. But with a max DC charging capacity of 200 kilowatts that will add up to 300 km of range in 15 minutes at full clip, range anxiety shouldn't be an issue.

Whether you're looking at charging times, ride quality or cabin isolation, there's no denying that the 2022 Mercedes EQS is a top-notch EV with luxury chops that surpass anything currently available in the US or Europe. By building a flagship from the ground up with electricity in mind, Mercedes-Benz is approaching this new segment with the same effort that it puts into its bread and butter S-Class. It's a big deal, and it acts like one.

The drop was a result of the ongoing challenges Ford and other automakers face with the semiconductor ...Read More

SAN ANTONIO, Texas — After 22 years and two generations (not counting the T100, a full-sized truck Toyota produced for eight years before the Tundra), Toyota has finally produced a pickup that can challenge its rivals: ...Read More

San Francisco — Hustling over California’s twisted two-lane Pacific Coast Highway in a Mustang GT, I suddenly came upon a three-car moving road block. I flattened the right pedal. ZOT! The GT gulped the trio like a ...Read More