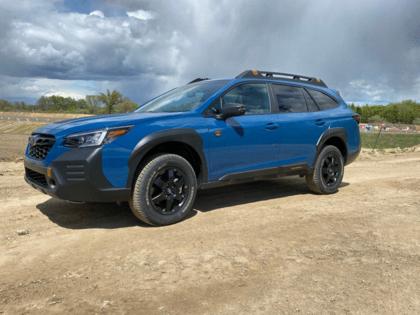 If you're a Subaru fan of a certain age, you'll remember when the Outback was the Legacy wagon's slightly ruggeder, taller flavor. Now, almost 20 years later, you can't even buy a Legacy wagon in the U.S.: The Outback pulled half an Oedipus and killed its father with its own popularity. And so it's time to welcome an even taller vehicle to stake its claim as the king of Subaru wagons. It's called the Subaru Outback Wilderness, and though it may look a bit awkward perched 0.8 inches taller than its brethren, it has the rugged looks, moves and features to make it a real candidate -- even if you never cross a trail more rugged than one to the shops.

So what's new? The big story is that lift. The Wilderness Outback offers a healthy 9.5 inches of ground travel. If you need context, that matches the clearance offered by the Mercedes-Benz G-Class. Few would question that thing's stance.

Mind you, performance after the asphalt ends has as much to do with drivetrain, and the Wilderness makes do with largely the same setup as the regular Outback. That is, open front and rear differentials driven from a continuously variable transmission and a clutch-type center differential. However, a shift to a 4.44:1 final drive ratio compared to the 4.11:1 in the standard Outback means more torque for low-speed rock crawling. Sadly, it also means fuel economy reduction: 22 mpg city, 26 mpg highway and 24 mpg combined compared to 23, 30 and 26, respectively. In my testing those figures proved accurate, with a 24.2 mpg average in mixed driving.

I expected an even bigger impact on the driving dynamics. Given the ruggedized vibe applied to the exterior and that extended stance, I figured the Outback Wilderness would be either overly stiff or so roly-poly that it'd scrape its side-view mirrors on the asphalt in every corner. I was pleasantly surprised to be wrong.

The Outback Wilderness rides like an even more plush Outback, soaking up potholes, frost heaves, railroad crossings and everything else I threw at it. Despite that, it maintains the relatively sharp turn-in and responsive feel of a Legacy. It's only in longer corners taken at speed that the higher roll-center starts to factor into the equation, but even then it's a minor consideration. Put simply, the Wilderness drives really well both on-road and off.

Augmenting the Wilderness' off-road abilities are a slender skidplate and a retuned X-Mode system. This is Subaru's moniker for its terrain-focused stability and drive mode system, which for the Wilderness stays enabled at speeds greater than 25 mph.

The other big change is found on the inside, with the interior trimmed in StarTex fabric. This water-repellent material has an almost neoprene-like feel to it and a groovy waffle texture that not only looks purposeful but feels genuinely durable. I didn't get the interior of the car you see here properly filthy (this was just a loaner, after all), but it definitely seemed more than up to the task of the typical Subaru lifestyle, muddy Labrador claws and all.

What's not such a highlight? Well, Subaru's infotainment system, to start. Starlink looks more dated by the minute, perhaps even more so on the giant, 11.6-inch touchscreen. Android Auto and Apple CarPlay, however, mitigate that to a large degree. Embedded navigation is part of the Wilderness' lone option package, a somewhat scattershot selection of features that for $1,845 also nets you a power moonroof and rear automatic emergency braking.

Subaru's active safety suite, on the other hand, comes standard. EyeSight has been recalibrated to deal with the Wilderness' capabilities and still features adaptive cruise control, lane-keep assist with centering, automatic emergency braking and the usual goodies. It works well but beeps incessantly -- every time it spots or loses sight of a car ahead of you, every time the lane-centering system engages or disengages -- all the time. It's functional but annoying.

And what about that look? The Wilderness literally stands out next to its Outback predecessor, but the visual changes extend beyond the lift. The extra body cladding suits the aggro look that's also presented by a set of simple but compelling six-spoke wheels wrapped in chunky Yokohama Geolandar all-terrain tires. The crystal white pearl color of my test vehicle is great for showing off the mud and works well with all that black plastic, but I'm a big fan of the hero geyser blue color, too.

What I'm not such a fan of are the anodized copper accents, if only because it's a very mustardy shade of copper and the things are all over the place. Highlighting tow points and tie downs? That I can dig. But the steering wheel, shifter and random tags on the door cards are a bit too much for me.

Regardless, the interior is comfortable and roomy, front or back, with 32.5 cubic feet of cargo space behind the rear seats and 75.7 cubic feet if you fold those seats down. That's nearly 50% more cargo space than the longer, more luxurious Volvo V90 Cross Country.

That Volvo is also much more expensive at $55,995 after a $1,095 destination fee. The Outback Wilderness I tested, with the $1,845 moonroof package, came out to $39,965 after a $1,125 destination fee. That's far cheaper than even the smaller Volvo V60 Cross Country, which starts at $46,545. Given the dearth of wagons in the U.S. market right now it's hard to know where else to compare, but a similarly optioned Jeep Cherokee Trailhawk comes out at $43,305 after $1,495 destination. The Jeep will do far better off-road, sure, but the Subaru promises a far more pleasant journey to the trailhead.

So other than the fuel economy hit and the $1,850 upcharge over an Outback Onyx Edition XT, you're not sacrificing much should you tick that Wilderness box when ordering yourself a Subaru. The lifted suspension and other tweaks make for a more capable machine, while the ruggedized good looks inspire adventure with every glance, even if today's quest is simply the commute home.