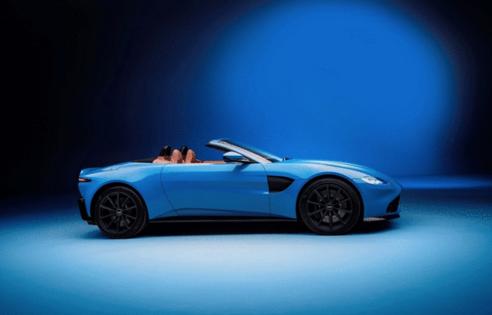 Does Aston Martin have more lives than a cat? It’s a company that nearly went bankrupt for the eighth time in 2020, but didn’t, thanks to a restructuring and a cash infusion by both Canadian billionaire Lawrence Stroll and Daimler AG, which increased its equity stake to 20 percent, up from 2.6 percent.

The bad news in the back office didn’t hamper the brand's racing efforts, as it nabbed 26 titles.

If the old adage “Win on Sunday, sell on Monday” still holds true, then Aston Martin should be in good shape for 2021, as a roadster rendition is added to its entry-level Vantage sports car line, last revised in 2018. As for the new droptop, with the exception of changes made for going topless, the Roadster shares its bits with its older relative — and that bodes well.

This sexy slab of speed was fetching enough in coupe form; as a roadster it’s positively ravishing. Its sensually sinuous form and tautly stretched sheet metal will find you drinking in its lines with a ravenous lust for what its shape promises. The test car’s looks were enhanced by its $5,000 “Yellow Tag” paint, a color not suited for those in the federal witness protection program. It also wore $18,400 worth of carbon fiber, $1,600 worth of dark chrome, $3,100 gloss black diamond 20-inch snowflake wheels, with $1,600 yellow brake calipers.

Think it’s expensive? It’s not. Looking good costs money. And once you climb into its snug cockpit, you’ll realize this is as much haute couture with horsepower as much it is a mobility device.

And when the weather turns idyllic, you’ll find the Vantage’s power top lowers rapidly, although oddly, the power top button is on the lower part of the driver’s door near the map pocket.

Once topless, it’s time to indulge in fun.

Performance, courtesy of a Mercedes-AMG twin-turbocharged 4.0-liter V-8 that generates a yummy 503 horsepower and 505 pound-feet of torque. Some may protest of a Mercedes-Benz powerplant, but the reality is that Aston-Martin’s engines have long had shared heritage. Look closely at Aston’s V-12, and don’t be surprised if it looks a lot like two Ford six-cylinder engines wed in mechanical matrimony.

Besides, there’s a whole lot of tech here to make you appear to be a better driver than you truly are, including a rear-mounted ZF eight-speed automatic transmission, rear-wheel drive, an active suspension, torque vectoring, and limited-slip rear e-differential, as well as Sport, Sport+ and Track driving modes. Notice there is no Comfort driving mode. If you’re driving this steed, speed is your only comfort, and that the Vantage provides.