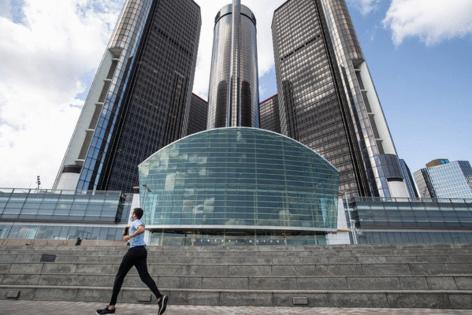 In an unusual move, GM CEO Mary Barra issued a Letter to Shareholders simultaneously with GM's first-quarter earnings results Wednesday. In it, Barra said GM expects to have a strong first half with adjusted earnings before interest and taxes of around $5.5 billion and GM is reaffirming its full-year guidance, "based on what we know today," coming in at the higher end of the $10 billion to $11 billion EBIT-adjusted range that it shared earlier this year.

"Our supply chain and manufacturing teams are maximizing production of high-demand and capacity-constrained vehicles," Barra wrote in the letter. "Our engineering teams are creating effective alternative solutions, and our sales teams, together with our dealers, are finding creative ways to satisfy customers despite lean inventories."

The automaker reported a first-quarter net profit of $3 billion, up from $294 million for the first quarter a year ago. Its EBIT was $4.4 billion, up from $1.3 billion. Net revenue was slightly down at $32.5 billion, compared to $32.7 billion.

GM credited a solid first-quarter to its ability to manage the complex production problems created by the chip shortage, as well as the strength of the auto markets in North America and China, and robust revenues at GM Financial, even while it continues to face the industry-wide challenge of the chip shortage that is crippling production.

GM said it plans to spend $9 billion to $10 billion in capital expenditure this year. About $7 billion of that is focused on electric vehicles, self-driving cars and engineering, Barra said during a media briefing following the earnings results announcement.

“We have not taken our foot off the pedal,” Barra said. “The electric vehicles that we planned to launch are on track and doing very well. The challenge with semiconductors is not impacting the transformation.”

"GM had an excellent quarter that would have been even more great had the semiconductor shortage not caused a large working capital headwind to cash flow," said Morningstar auto analyst David Whiston. "The stark contrast in tone from Ford’s rest of 2021 outlook is a good sign that GM is, as it says, highly confident in its outlook, and backs that up by not changing its estimate of the semiconductor shortage impact."

In its earnings last week, Ford warned that the next three months will see serious parts supply problems related to semiconductor chips that could cut planned production by 50%.