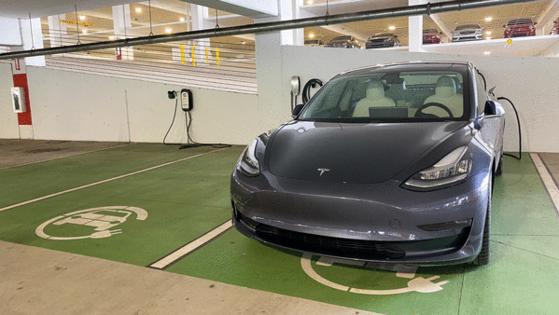 The parking giant said it chose Tesla because the brand accounts for more than 85% of the electric cars driven in the United States. LAZ said Tesla drivers will be able to find at its lots and garages by using a Tesla app and a touch screen in their vehicles.

The introduction of the “pay-for-use” charging stations also is part of a strategy to attract more vehicle drivers to LAZ venues and generate more revenue for its clients. Residential, commercial, hotel and retail locations are the target locations for the launch.

“This initiative recognizes the rapid growth of the electric vehicle market and positions our clients to meet the fast-growing demand for charging stations,” LAZ chairman and chief executive Alan Lazowski said, in a release.

The rates, LAZ said, will be competitive with other Tesla chargers nearby.

In Connecticut, Teslas can only be leased, but there is a push again this year in the General Assembly to permit electric vehicle manufacturers to sell directly to the consumer. Citing environmental concerns, legislators backing the bill are looking to put 500,000 electric cars on Connecticut’s roads by 2030, up from 12,000 now.

On Friday, Axios reported that U.S. electric car sales more than doubled in the first quarter of this year compared to the same period in 2020. U.S. sales still lag markets in Europe and China, Axios said, citing new data from the International Energy Agency, but are starting to pick up speed.