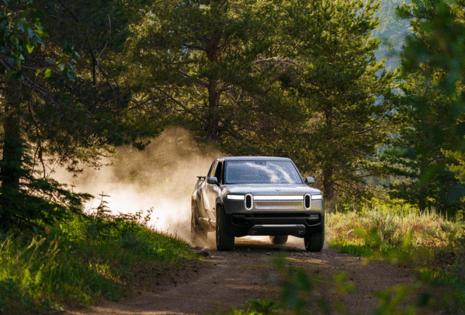 Dubbed the Rivian Adventure Network, it promises an ambitious, 600 super-charging stations offering 3,500 chargers by 2023 on routes across the United States and Canada. The chargers will be exclusive to Rivian owners, though a secondary, so-called Waypoint network of 10,000, 240-volt chargers will be open to the public at hotels and other businesses.

With big capital reserves, Rivian and Tesla are separating themselves from the electric-vehicle pack by building exclusive charging networks. Other legacy automakers (as well as less capitalized EV startups like Lucid and Fisker Inc.) intend to rely on third-party, fast-charging networks like Electrify America, Chargepoint and EVGO.

Tesla's Supercharger network launched in 2012 with its Model S sedan and has grown to 1,101 stations across North America. It has added enormous overhead cost to the young electric automaker — but has also been a key factor in establishing its EV dominance as Teslas can reliably slake their thirst for electrons on long-distance trips.

Competitors like the Chevy Bolt, GMC Hummer EV, Ford Mustang Mach-E, and Volkswagen ID.4, by contrast, cannot use Tesla or Rivian fast chargers. They must rely on the patchwork of third-party chargers.

Legacy automakers hope Electric America's fast-growing network of 500 stations (built by VW as penance for the Dieselgate scandal) — as well as anticipated spending from electric utilities and the Biden Administration's forthcoming, $3 trillion infrastructure bill — will help them compete.

"(Our) nationwide network of DC fast chargers are capable of adding up to 140 miles of range in 20 minutes to the R1T and R1S," said Rivian in announcing its network on its website.

"The Rivian Adventure Network is designed for quick recharges so you can keep moving. Los Angeles to Tahoe. Manhattan to the Adirondacks. I-70 to The Rockies. Michigan's UP via I-75. The entire Blue Ridge Parkway from Shenandoah National Park down to Great Smoky Mountains National Park. The network also extends further into more remote destinations."

The remote destination promise dovetails with Rivan's marketing as an adventure brand bringing battery power to off-road vehicles. The brand is aimed at well-heeled overlanders who want to get away to national parks and other locations.

Rivian promises its Waypoint 240-volt, "Level Two" chargers in every state park. It jump-started that goal this week by committing to install at least two charging stations in all 42 Colorado state parks by July.

The EV-maker is also committed to producing 10,000, battery-powered delivery trucks for Amazon by 2022 (100,000 by 2023) — but the Rivian Adventure Network will operate separately from infrastructure charging those trucks.

Rivian says its charging network will be conveniently located on highways and roads near cafes and shops. Tesla Superchargers are commonly found at Meijer mega-stores with dining and shopping nearby to kill time while its vehicles charge up to an hour depending on the amount of range required. Electrify America stations are frequently found at Walmarts. A Toledo area EA station is located at a Ohio turnpike service plaza.

Rivian says that details on pricing will be released for customers soon. Third-party charging companies typically have subscription plans with some automakers covering their costs for first-time EV buyers. Tesla rolled out its service free to Model S owners in 2012 but has since begun charging as more vehicles like the hot-selling Model 3 sedan have come to market.

Unlike Tesla, Rivian's plug is based on the common CCS American standard so R1Ts, for example, can plug directly into EA fast chargers. Teslas require an adapter.

Utilities are getting in on the fast charging act, too. Six Midwest utilities — including Consumers and DTE Energy — have committed to building a fast-charging network from Michigan to Kansas by 20022. Currently, Consumers claims fast-charging stations in Cadillac, Gaylord, Marshall, Big Rapids and Saugatuck, with plans for 30 more.

"We're excited to see automakers like Rivian building their own networks," said Kellen Shefter, Electric Transportation director for the Edison Electric Institute, which represents the power industry. "Tesla has used their network to serve and build loyalty with their customers, so we're not surprised to see Rivian following suite."

EEI expects 20 million EVs on the road by 2030 (up from an estimated 1.4 million today). Shefter says the numerous parallel fast charging networks bring high voltage power into new areas like shopping centers but that the ramp up will be evolutionary and should not strain the power grid.

Rivian claims its chargers will be "powered by 100% renewable energy." That's likely a reference to company plans to buy carbon offsets like Renewable Energy Certificates — as the Adventure Network will draw juice from a power grid made up of natural gas, coal, and nuclear power.

The secondary, 10,000 Level Two Waypoint chargers will be found at restaurants, hotels, and campsites, to deliver up to 25 miles of range an hour.

Like Tesla, Rivian plans charging management via in-vehicle navigation or through a phone app. Details will be forthcoming as R1Ts and R1Ss roll off Rivian's Normal, Illinois, manufacturing line this summer.

"On the road, our in-vehicle navigation automatically routes you through any needed charging stops, prioritizing Rivian chargers as well as DC fast chargers from CCS partner networks," says the company of its vehicles, which boast up to 300 miles of range. "Simply enter your destination, our maps will plan charging for you."