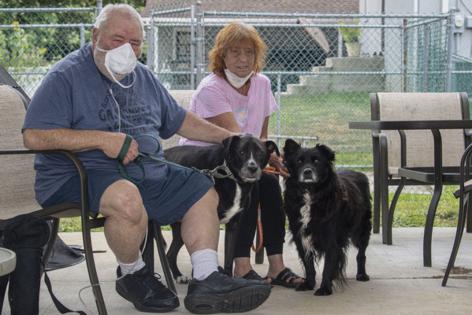 PHILADELPHIA — Sandy Lange has always had an open heart for dogs in need. So when the folks at Philadelphia’s Wet Nose Rescue told her about an old dog that had lived outdoors all her life, never had a bed, just lots of puppies, Lange agreed to give it a try.

As it turned out, outdoor Daniella — Dani for short — was a fast learner. Once in her new home, the senior pooch made a beeline for the spare bedroom. Curling up on the carpet under a blanket Lange draped over her, she fell fast asleep.

Three hours later when Dani woke up, Lange called her to go out.

“When I bent down to put on her leash, she looked at me and she gave me a big kiss on the face,” said Lange, a senior herself. “I’ll never forget that. It was like she really appreciated me and being in a house.”

Lange and Dani became the first pairing in a program that aims to meet important needs — love, caring, and companionship — shared by people and canines alike.

Called the Grey Nose Society, a project of the nearly 15-year-old Wet Nose, the program matches senior dogs in need of a home with senior humans, usually 62 or older, who become permanent foster owners. The rescue remains responsible for the dogs’ medical expenses, which can get pretty steep with aging animals and hard for seniors to afford. Grey Nose can also help pay for food or other necessities. And if for some reason the older person can’t keep the dog, the rescue will take it back. They also offer senior dogs for conventional adoptions at the reduced fee of $50.

Kim Leslie, who cofounded Wet Nose with her husband, Steve, got the inspiration for Grey Nose from her experiences with her own mother. Before her mom passed away, she had a Chihuahua named Baby.

“Her life revolved around that little dog,” Leslie said. “They were good for each other. It gave my mother a reason to get out of bed in the morning.”

But as Baby got older, the dog’s health problems — and vet bills — started to increase.

The daughter ended up working out an arrangement with her mother’s vet to send her the bulk of Baby’s bills.

But she knew other elderly pet owners love their dogs just as much as her mom loved Baby, and they face similar dilemmas.

The advocate was also acutely aware of the difficulty getting older dogs adopted.

So she started researching solutions. She came across the Mr. Mo Project, a New York-based nonprofit that places senior dogs into loving homes through permanent foster arrangements. The project assists with expenses like vet care.

Mr. Mo seemed like a great way to help get older dogs out of the shelters. What about taking it one step further, Leslie thought. By bringing senior dogs together with senior citizens, she figured they could help each other.

“The dog needs them, they need the dog,” Leslie said. “It’s just an awesome combination.”

That’s what Dawn Hollywood, 56, and her husband, Michael Wagner, 60, a retired mental health worker, of Northeast Philly are discovering with Snuggles, a fluffy, white 9-year-old they got from Grey Nose a few of weeks ago.

Snuggles has won them over on the benefit of a senior dog.

“She knows her place in the house. She knows she’s loved,” Hollywood said.

So did Truman, a black Lab mix who found a home through Grey Nose, and perhaps for the first time in his whole dog life.

At first, Leslie said she thought Truman would be a hospice placement, a few weeks of comfort at the end of life. He came to them from a South Carolina rescue partner. When police there took him off the street, every rib showed.

“The poor thing was the worst I’d ever seen,” Leslie said.

Ziggy Becker, 71, of Wrightstown, agreed to take Truman. But she wasn’t about to accept the worst was inevitable. Becker, a retired mental health worker who’s rescued many dogs, fed severely malnourished Truman small, frequent meals, gradually increasing his food intake. As he put on weight, his strength increased. Before long, the old dog was playing with toys like a pup, the squeakier the better.

Truman, the dog that didn’t seem like he would survive a month, ended up living over three more years before he passed away few months ago.

Becker knows his last years were good ones. She’s told the Grey Nose folks she would like to take another senior dog. She figures Truman gave her as much as she gave him.

“Dani was amazing, Dani was a sweetheart,” said Lange, 67.

Dani, a black Lab/border collie mix, was 10 when she came to live with Lange, a retired stock clerk, and her husband, Tony, 69, a retired mechanic, but lived nearly five more peppy years. She became best friends with Popcorn, the Langes’ younger dog and she provided the neighbors with no end of entertainment when Lange tried to take Dani on a walk route not to her liking.

A year after Dani’s passing, Popcorn was still in mourning. So when Gray Nose told the Langes about Flip, a 13-year-old black Lab/border collie mix like Dani, they opened their home once more.

Recently, a fellow senior was talking about getting her first dog. A puppy, she was thinking.

“I said, Don’t take this the wrong way, I love all dogs. But puppies are overrated,” Lange said.

Consider adopting a senior dog, she told her friend.

PHILADELPHIA — Every summer, hearing-aid wearers come to audiologist Rebecca Blaha with the same complaint. Suddenly, their sound quality has become muffled or crackly. In some cases, her patients at the Pennsylvania Ear...Read More

PHILADELPHIA — When the doorbell rang at 2 a.m., Ilse Korona already knew who was outside of her family’s Vienna apartment.

Hours earlier, Korona, then 18, told her parents she would answer the door if the Nazis came ...Read More

High atop Beech Mountain in North Carolina and hidden within the trees is the somewhere over the rainbow: the Land of Oz. It is as magical as the world L. Frank Baum created in his classic "Oz" book series that was brought...Read More

Eight months after falling ill with COVID-19, the 73-year-old woman couldn’t remember what her husband had told her a few hours before. She would forget to remove laundry from the dryer at the end of the cycle. She would...Read More

Eight months after falling ill with COVID-19, the 73-year-old woman couldn’t remember what her husband had told her a few hours before. She would forget to remove laundry from the dryer at the end of the cycle. She would...Read More

Fran Seeley, 81, doesn’t see herself as living on the edge of a financial crisis. But she’s uncomfortably close.

Each month, Seeley, a retired teacher, gets $925 from Social Security and a $287 disbursement from an ...Read More