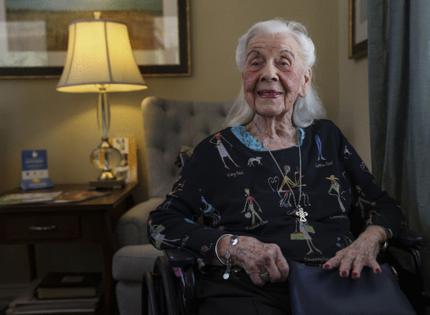 DENTON, Texas — Mildred Kitchens has been witness to a century of Texas history, and the 101-year-old has a lot of stories to tell – including about her time providing family planning services before the landmark Roe vs. Wade case was decided in 1973.

Her work in reproductive health that dates back more than an half-century is particularly timely in wake of last week’s U.S. Supreme Court decision overturning Roe.

Kitchens, a few weeks shy of her 102nd birthday, was a medical case worker around 1971, for a public health family planning service visiting clinics in dozens of towns, from Texarkana to Livingston.

The Denton centenarian said the Supreme Court’s ruling to overturn Roe, the 1973 case that originated in Dallas County that enshrined the constitutional right to an abortion, brought up a lot of feelings for her.

“There are so many ways not to be pregnant, if you don’t want to have a baby,” Kitchens said.

In her career as a social worker, she said she only recommended abortions for two of her clients.

“I think having an abortion affects a woman, probably internally, a lot, when she sees other people with beautiful children at a later age, and wonders what would have happened if she had not had that abortion,” Kitchens said.

A 2020 study that followed women for years after they had they had an abortion found after 5 years, 95% of those surveyed said they did not regret having the procedure.

The first birth control pill, Enovid, was approved by the Food and Drug Administration in 1960. By 1964, the pill was the most popular form of reversible contraception in the U.S., which it remains to this day.

Kitchens said the family planning service did “everything but abortions,” offering tubal ligations and intrauterine devices – but Kitchens said most women wanted birth control pills, and many did not want their husbands or partners to know about it.

At the time, teenagers, if they were unmarried, needed parental permission to get contraceptives. Kitchens helped some skirt the process.

“My name was well known as a social worker,” she said.

Current law still requires anyone under 18 to have permission from parents, a guardian or a judge to get an abortion.

Kitchens, born in Diboll, Texas, in 1920, had a long career as a social worker in Texas.

Kitchens said as a teenager in Diboll, abortion was not ever talked about.

“If a girl dropped out of school, she went to stay with her grandmother for nine months,” Kitchens said. “We didn’t talk about abortions. She had the baby some way. That’s how I grew up.”

Kitchens said she grew up poor – and was determined to get an education.

After graduating from what is now Texas Woman’s University at 19, she worked for the Works Progress Administration, interviewing workers about their health, she described in a 2020 oral history with the History Center in Diboll.

She worked for the Red Cross during World War 2, while her husband was in the Navy, and taught high school for a time in Tyler.

When she left teaching, she found her way to the family planning service. A 1971 article in the Tyler Morning Telegraph described the program as part of the Public Health Region 7 program run out of East Texas Chest Hospital in Tyler. According to the report, it was the first program of its kind in Texas.

Shirley Sidwell, the director of the program, told the paper that the service provided family planning, education, and follow-up care for women in the region.

“We never had a clinic that wasn’t packed with women,” Kitchens said.

She said the program was short lived, and she later carried on her career as a social worker for the State Welfare Service. She retired from social work at age 80.

“We were a very close team. We rode together everywhere, and we worked together at the health department in Tyler,” she said. “It was a real good program. The government was trying to help us, but like everything, anything good that can make money for somebody, is quickly taken over.”

KANSAS CITY, Mo. — Wes Grimm comes from a long line of untamed eccentrics — ramblers and hustlers, prizefighters and riverboat steersmen — and at 63 years old he still very much honors the family tradition.

HARTFORD, Conn. Baby boomers who came of age with color TV, microcomputers and space exploration are driving the popularity of the latest innovation: electric bicycles that graying bikers can propel without much exertion. ...Read More

Legend holds that fairy doors are magical portals and, while humans can’t travel into this realm, they can at least find the tiny doors if they know where to look.

That place is Dublin, Ohio, home to the very first ...Read More

That makes her one of millions of Californians who don’t make enough to ...Read More