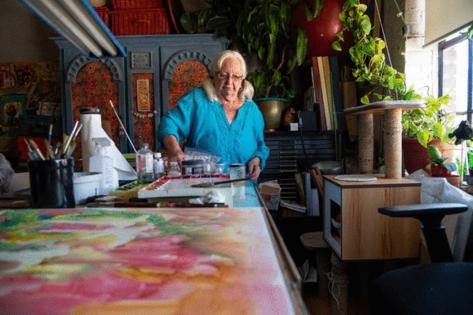 SACRAMENTO, Calif. — The scent of linseed oil and turpentine hung in the air, and 4-year-old Chloe Fonda was mesmerized. It was 1939, and she was a tiny thing who watched her retired midwife grandmother, Chloe Wassum, painting landscapes in oils. The namesake granddaughter was destined to be a San Joaquin Valley farm girl, but Fonda loved the magic trick of making a blob of pigment into an image. She knew from that tender age that she didn’t want to stay on the sprawling barley ranch east of Modesto; she wanted to be an artist.

Now 87, it’s all happening for Fonda.

“If there’s a moral to the whole story, it’s never give up,” Fonda said, sitting in her studio in downtown Sacramento’s Warehouse Artist Lofts, known as WAL. “I’m having the most wonderful experience in my life.”

She said she’s produced more work in her two years at the WAL than she had in the preceding 50 years. Fonda credited four things: “No yard, no kids, no dogs, and I barely feed him,” she said, gesturing to her husband, James Fonda.

The artist refers to her work as “playing.” She loves bold colors and patterns, and in one series of mixed media works, she painted still lifes of fruit and then stuck on real fruit stickers — it’s not just a banana, but a Dole banana. In a portrait of James playing cards at their small kitchen table, Fonda includes, at the bottom of the canvas, her own perfect cribbage hand, about to trounce him. In the background, she painted the clipboard that they really do use to keep score of their daily card games (she makes it seem fairly even in the painting, but when a reporter viewed the 2022 score sheet last Wednesday, Fonda was 13 games ahead).

Distractions en route to the studio

Fonda and her husband spent two years on the waitlist for their subsidized, light-filled apartment, and she’s waited for opportunities before. In the 1950s and ’60s, Fonda put off art school for over a decade. She spent a year in Oakland at the California College of the Arts, back when it was called the California College of Arts and Crafts. But after two semesters, she went back to the San Joaquin Valley and got married. She had two children and stopped painting for 10 years, instead spending her time “being the perfect mother” to her two sons.

She’d watched her beloved grandmother find time to paint in her retirement, only after her husband was gone; she knew her grandmother learned to paint in the first place only because she’d been “a spinster” who remained single during her 20s. Knowing this, Fonda kept her year at art college in the back of her mind as she became a young mother. When Fonda was around 30, she left her husband.

She recalled, “I filed for divorce, I woke up the next morning, I thought, ‘I gotta go back and finish.’”

Fonda got her degree in 1969 and became a graphic designer; she got a job at a winery alongside male colleagues who she recalls making twice as much money for the same work. Then she married James, a family law attorney, and moved into a Victorian house in Alameda, where they lived with their sons from her previous marriage; their daughter was born in 1973. They put in skylights and converted the attic into an art studio.

When the couple later moved back to Oakdale to be closer to their parents, they bought a property with a chicken house that had already been converted into an artist’s workspace.

But Fonda never had much time for art — the house was on two acres, with a huge yard and a rose garden she tended. She had to traverse a plethora of planted distractions just to get to her studio. James said she usually turned her attention to something else before she even made it to the former chicken house where she worked.

Working out of Warehouse Artist Lofts

When the Fondas’ daughter, Gioia Fonda, suggested they move to Sacramento into an “artist loft” where Fonda could finally focus, it seemed like a great idea. “We looked at some senior apartments,” James said; Fonda interrupted, “and they don’t look like half as much fun.” WAL, they thought, would give Fonda a chance to meet other artists, and to rip out the pages from old art textbooks to make a collage for a new headboard. In 2020, they got rid of all the stuffy old china that Fonda always hated anyway and filled their new kitchen cabinets with vibrant Fiestaware.

Gioia is an art professor at Sacramento City College, a point of pride (as Fonda put it, “I raised — we raised — another baby artist”). Before her parents moved to WAL, Gioia made up little calling cards with a cartoonish illustration of the couple and handed them out to friends in the building.

Because of the ongoing pandemic, Fonda hasn’t met as many fellow artists in the complex as she’d like, but she does get recognized in the elevator sometimes, on account of the calling cards. She opens up the doors of her studio to visitors every First Friday, asking people to wear masks when they come inside to view her art because, as a handwritten sign by the door said in July, “Chloe is really an old lady.”

Over her lifetime, Fonda said, art has “always been just kind of like a hobby, pastime, never serious.” She still feels less than serious about her work — she thinks of herself as just playing around and learning. “I’m just trying to figure it out,” she said. “I’m 87 years old, so I don’t have any time to waste.”

Now that she finally has the freedom to focus on her work, “It’s been delightful.”

See Fonda’s art for yourself

Along with other artists, Chloe Fonda opens her studio during First Fridays at the Warehouse Artist Lofts. The public event happens monthly at 1108 R St, Sacramento, CA 95811, from 6 p.m. to 9 p.m. Fonda’s Instagram is @chloefondaart.