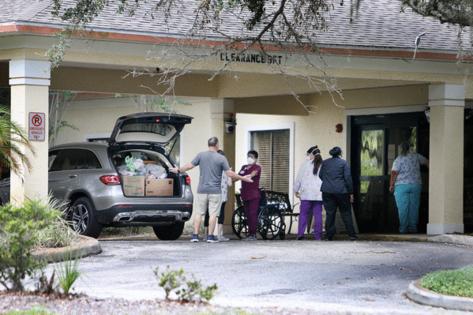 Goodman had called Raydiant Health Care of Brandon her home for 13 years. By the next day, she would be gone.

“I feel horrible — I don’t want to leave,” she said late last month as she watched her two daughters pack her belongings. “But what can I do?”

Residents of the 120-bed Tampa Bay nursing home learned in June that it was closing. They said they were told that they had 30 days to find places to live.

About half of its 87 residents left within a week of the announcement, according to a spokesperson for the Centers for Medicare & Medicaid Services.

The nursing home last Wednesday became the latest in Florida formerly affiliated with Consulate Health Care to lose its federal benefits since May because of poor patient care. The federal government considers termination of Medicare and Medicaid a “last resort,” implemented only after “all other attempts” fail to resolve health and safety deficiencies.

A bankruptcy filing and bad press have plagued Consulate — the state’s largest nursing home chain — over the past few years. The local nursing home, about 14 miles east of Tampa, appears to have changed hands at least twice since January. Such corporate intrigue is a mere secondary concern, however, for vulnerable residents who are caught in the fallout of the for-profit industry.

Goodman sat in her wheelchair next to her roommate’s bed. She and her roommate had greeted the morning together like always.

By noon, the roommate had already moved out. Goodman wasn’t sure if she’d see her again.

The news broke during bingo.

Residents recalled tears in the nursing home administrator’s eyes as she delivered the message on June 21: Within a month, the place would close. Residents suddenly found themselves in need of housing.

That same day, the federal government said it would terminate Raydiant Health Care of Brandon’s Medicare contract, according to a letter, stating that it had failed to “meet Medicare’s basic health and safety requirements.”

The nursing home no longer can receive federal money for the services it provides. The loss of such payments often makes it difficult for a place to survive, as Medicaid pays the bills for more than half of all nursing home residents in Florida. Individual costs can approach $80,000.

The administrator for Raydiant Health Care of Brandon did not respond to requests for comment on the loss of the federal contract or whether the nursing home anticipates reopening.

The Florida Agency for Health Care Administration, which licenses state nursing homes, has not yet received notification that the nursing home plans to close permanently, according to agency spokesperson Kayla McLaughlin.

A front desk spokesperson at Raydiant Health Care of Brandon said new clients no longer were being accepted, including private-pay residents, because it was closing.

Raydiant Health Care of Brandon currently has a one-star quality rating on the Centers for Medicare & Medicaid Services’ website, the lowest mark on a five-star scale given to nursing homes that receive federal money, reserved for the bottom 20% within a state.

Some residents remember the night deputies from the Hillsborough County Sheriff’s Department showed up as staff searched outside for a missing female resident.

The woman had walked out of the home, according to subsequent federal and state inspections. Staff hadn’t checked if the alarm systems worked.

It was Dec. 27, 2021, according to Hillsborough County Sheriff’s Office call records and federal inspection reports. The woman had wandered along the side of a two-lane road and crossed a “dangerous intersection,” inspection records state. She later was hospitalized for unspecified medical conditions.

The nursing home failed to properly document that the woman had gone missing, according to inspection records. Raydiant’s administrator at the time initially told inspectors that the resident had not escaped, stating that she left after signing out against medical advice.

Since January, the home has been cited for failing to maintain accurate medical records, failing to administer medication on time and violating state law by allowing nurse aides to work beyond the legal limit before passing their certification exam, according to state and federal inspections.

In April, Raydiant agreed to pay the state $11,500 after the Florida Agency for Health Care Administration said staff failed to wear proper personal protective equipment in the rooms of COVID-positive residents or monitor their symptoms for worsening illness the previous year, according to the settlement agreement. The company denied these allegations, according to the documents.

A June 10 inspection found that the nursing home failed to report that a resident suffered a broken bone during a staff-assisted transfer from her bed to a shower chair in March.

After that, the Centers for Medicare & Medicaid moved to terminate Raydiant’s provider agreement, according to an agency spokesperson.

Several residents and family members said Raydiant Health Care of Brandon recently had changed ownership. Some worried that the federal government didn’t give the new company enough time to prove it would manage differently from past owners — though they said they did not know the identity of the new operator.

The sixth-largest nursing home company in the nation, Consulate entities filed for bankruptcy last year after the U.S. Court of Appeals upheld a multimillion-dollar fraud judgment against the chain, ruling that several of its nursing homes had defrauded taxpayers.

Shortly thereafter, Consulate renamed and divided its Florida nursing homes among three companies, which appeared to still be affiliated with the chain. One of them, Raydiant Health Care, assumed ownership of the Brandon location around the new year.

On April 1, the Brandon nursing home changed hands again, according to Jared Elliott, Raydiant Health Care’s chief executive officer, and a change of ownership application submitted to the Agency for Health Care Administration.

The proposed new owner is “Brandon Health OPCO LLC,” according to the application, a limited liability company based in Delaware and first registered in Florida in late January.

The change of ownership has not yet been approved by the state, according to McLaughlin, the Florida health agency spokesperson, who noted the application “remains under review.”

The state agency’s website still lists Raydiant’s previous limited liability owner — which registered a Consulate office in Georgia as its mailing address — as its current operator.

A tarp is now draped over the old sign of Raydiant Health Care of Brandon.

It reads “Brandon Center for Nursing and Rehabilitation.”

Buses arrived on June 24, said Karen Thiele, 61. They loaded up bags and residents and carted them off to new nursing homes.

“It literally became like a ghost town here,” Thiele said. “They moved them out so quickly — there were a lot of tears and a lot of confusion. I was surprised more families weren’t here to help with the transition.”

Thiele flipped through a small notebook as she spoke. Inside were the phone numbers she’d scrambled to gather from friends before their departures.

“All my friends here are in their 90s, and many of them are not taking it well,” Thiele said. “That’s the main thing that’s breaking my heart — I’m afraid they won’t last long at their new places.”

In her ninth decade of life, Judith Goodman began another move-in day. She started life at a nursing home 2 miles south of Raydiant, less than a week after the announcement. The new place is currently on the Centers for Medicare & Medicaid’s “special focus facilities” candidate list, a designation reserved for nursing homes that substantially fail to meet the agency’s safety requirements over multiple inspections.

When Goodman left her old nursing home, she thought of her husband of half a century, who died in 2006.

“I hope Julius knows where I am now,” she said.

TAMPA, Fla. — No one thinks it’ll happen to them.

Scams are something that happen to other people. Like falling and breaking a hip. Or losing the ability to drive.

“Police ... can give people information, but it’...Read More