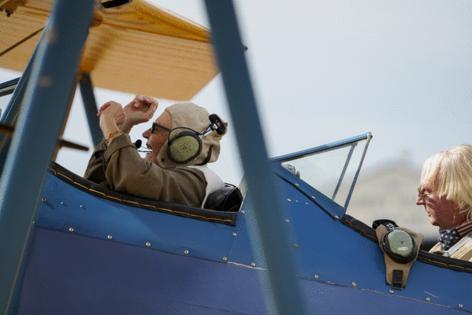 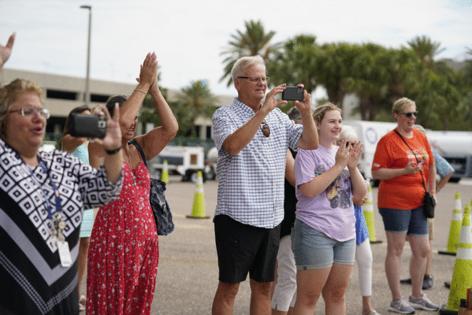 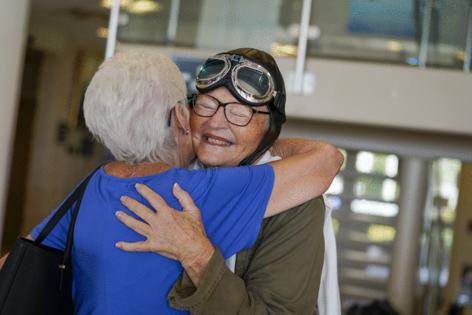 She became a photographer instead, like her great-grandfather. But the subjects of his work compelled her the most — the glistening fighter planes just debuting in World War I.

Throughout adulthood and the quiet moments of parenting her only daughter, she longed to take flight.

At 47, she became a flight attendant.

“You know when you just love something right away?” the Clearwater, Florida resident said. “I would read the training manual over and over. It was like, I would do this for free.”

It quelled some of her yearning. But she dreamed about the days when passengers could feel air on their faces as they zipped through the sky, and wondered what it would be like to journey in planes last in vogue during her father’s service in World War II.

Earlier this month, she got her chance.

Wood, now 74, was diagnosed with metastatic breast cancer last July. Doctors told her she had six months to live.

Almost a year later, she stood on the tarmac of Albert Whitted Airport in St. Petersburg, donning leather Amelia Earhart boots and a crisp ivory scarf, in front of a World War II biplane. A friend complimented her sharp appearance.

“I just wish I had hair for it,” she said with a twinkle in her eye.

Wood was chosen to receive the aid of My Jump!, a nonprofit that helps seniors fulfill the items left on their bucket lists, with a particular focus on low-income older adults.

A cadre of friends stood waiting to see Wood take off, holding signs that read, “We love you” and “Hold onto your a—!”

A pilot from her tenure at American Airlines, Bill Norris, 66, was among them.

“This won’t scare me after flying with you!” she quipped at him with a chuckle.

Steadied by her daughter’s boyfriend and maintaining her humor, Wood boarded the deep barrel seats of the ancient aircraft like a pro. A pilot took the seat behind her.

The propellers started. Wood reflexively gripped her head with both hands, allowing herself a moment of genuine excitement — and perhaps fear — for the first time that day.

She left the earth, the plane gingerly teetering up and down before steadying into its climb, as onlookers hugged her daughter Heidi Stubbs, who fervently wiped her eyes.

“Flying has always been the thing that makes her heart glow,” Stubbs, 52, said. “I’m so glad she felt good enough to come.”

In the air, the pilot surprised Wood. He turned over control to her, switching command to the front seat where she sat. For 10 minutes, she flew — by herself, stick in hand — turning around over the waters of the beaches and heading back to downtown St. Petersburg.

It was just as she’d suspected. Easy. Natural. Like coming home.

“I thought, ‘I could have done this,’” Wood said. “But everything happens in the timing and way it’s supposed to. That’s one thing this diagnosis has taught me.

“I would change it if I could,” she added. “But you learn you’re capable. You see the way people step up. You realize you have no control, but whatever being has control of the universe — you have to just appreciate that it happens the way it’s supposed to.”