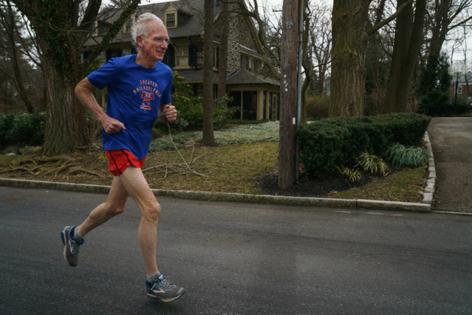 At 73, the runner from Bala Cynwyd, Pennsylvania, shattered the 50-kilometer world record for his age group on Sunday, posting a time of 3 hours, 56 minutes, and 43 seconds.

That time was more than 19 minutes faster than the old record for that distance (just a shade over 31 miles). He maintained an average pace of 7:37 per mile — faster than most people can run for just one mile, let alone 31 in a row.

And, as usual, the self-described "Ultrageezer" did it with good humor.

"It's good to see I haven't gotten old," he told Runners World.

At 70, he broke three hours in the marathon

Dykes already holds the unofficial world record for the marathon in his age group, having run 2:54:23 in Jacksonville, Fla., in December 2018. That race was not sanctioned by USATF, so he plans to try again for the official title in October at the London Marathon, he told Canadian Running magazine.

The retired computer programmer's exploits are so unusual that researchers subjected him to a battery of physical tests for a 2019 article in the New England Journal of Medicine. They found his oxygen uptake was "exceptional" for his age, but said that trait alone was not enough to explain his success.

In a 2019 Inquirer profile, Dykes gave a simple answer when asked for his secret: "I just run."

In an interview with Canadian Running magazine after the 50-kilometer event, he also credited Philadelphia running coach John Goldthorp, calling him a "miracle worker."

Dykes said he was not yet in top marathon shape. To set the record, he will have to run nearly a minute per mile faster than he did in the 50-kilometer race. He seems up for the challenge.